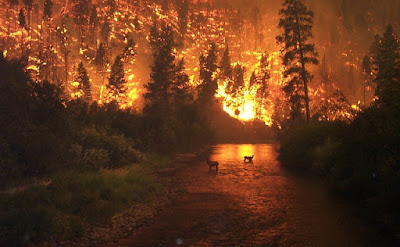 Once upon a time, long before people existed, two giants, Hannah and Rose, lived high in the mountains. The sisters made a cave their home, enlarging it to fit their height with one mighty kick that sent tremors through the earth for miles.
They spent most of their time outside, up early to watch the sun rise and break through the clouds. During the day, they took turns rearranging the rocks in their rock garden. That was hard work and when either of them sighed, a strong breeze swept down the mountain into the valley. Every evening, they leaned against the side of the mountain to watch the sun go down, enjoying the bright streaks of red and orange in the sky.

Despite their size, they didn’t need much to survive. A quick scoop of water from the nearby river quenched their thirst, though they were always careful to sieve out the fish and water creatures and return them to the river.  Once a snapping turtle nipped Rose on the finger. Though it didn’t hurt very much because her fingers were the size of logs, after that, she always swirled the water a little before scooping it up.
When they felt hungry, Hannah stood on Rose’s shoulders and reached high into the sky, with a fine net to gather space plankton. Tiny almost invisible creatures made delicious and nourishing soup, exactly what giants liked.
Hannah and Rose led a peaceful life, watching over the valley from the top of the mountain. They acted as guardians for all the wildlife on the mountain and in the valley.  One summer, when a searing drought parched the land, Hannah found a dry field and stomped her foot to make a deep hole. Rose scooped water from a faraway river to fill the hole Hannah made. The newly formed lake quenched the animals’ thirst. 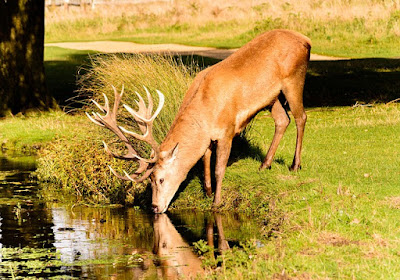 When a hurricane tore through the valley uprooting trees one autumn, Rose and Hannah spent the following days carefully lifting each tree and placing it back into the earth.  Birds and squirrels chattered happily, knowing their homes were saved.
One day, a wildfire tore through the valley. The flames leaped from tree to tree and across grassy fields. Hannah and Rose scooped water from the river over and over to douse the flames, but to not avail. The fire continued to spread. Bears, moose, lynx, deer, and other wild animals fled the flames but the high mountains blocked their escape. What could be done?
Hannah and Rose saw the frightened animals at the base of the mountain trying to escape the fire. Together, they started kicking the mountain and throwing rocks aside to create a mountain pass for the animals to safely cross to the other side. Never had they attempted such a big job! On and on they worked until they made a pass wide enough for the biggest elephant and smooth enough for  the smallest hedgehog to navigate.
Hannah and Rose stood at the pass in the thick smoke that filled the valley and yodeled so the animals could find their way to safety by following the sound of their voices. On and on the animals came, big and small, old and young, throngs and throngs of them, anxious to escape the flames. They scurried to safety guided by the giants’ thunderous voices.
Even though they were exhausted, Hannah and Rose stood at the base of the mountain pass and guided the animals until the very last creature, an old porcupine who moved slower than the hours from midnight to morning, was well on his way. Just then, a gentle rain began to fall. The dark sky promised a long rain, one that would extinguish the fire.
Hannah and Rose, tired as they were, collapsed and fell asleep where they stood, their hard work finished. The rain washed over them and in the morning, two tall stone peaks stood, glittering with crystal, beside the mountain pass to mark it forever for those who needed to find their way to the other side. 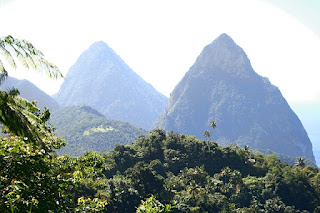 Copyright 2017 by Valerie L. Egar.  May not be copied or reproduced without permission from the author.

Published July 22, 2017 Journal Tribune Sunday (Biddeford, ME)
Posted by Snickertales at 9:47 AM