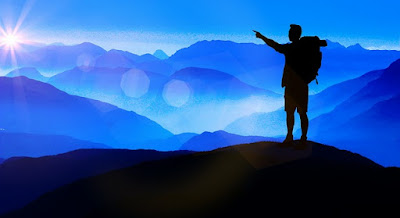 When  Petyr awoke, he was surprised to find a woman he did not recognize in the kitchen making soup. Her long fingers spidered over the potatoes in the bin and she selected a few. She whacked them into pieces with a cleaver and threw them into boiling water. She was tall as his mother, but her hair was grey and unruly instead of brown and straight.  Instead of humming the way his mother did, this woman talked to herself in a raspy voice while she worked. “Soup, soup, he’ll eat and like it. Or else.”
“Where’s my mother?” Petyr demanded.
“I’m your mother,” the woman cackled.
“You are not!”
“Don’t get fresh with me,” the old woman yelled, pointing the cleaver in Petyr’s direction. “You will eat your soup and start on your journey.”
Petyr’s eyes widened. “What journey?”
“Stupid boy!” the woman hissed. “To find your fortune, of course.”
“What if I don’t want to?” he yelled. “What if I just sit by the river and do nothing?”
The old woman laughed. “Then fate will find you sleeping, and you’ll be sorry!” She ladled soup into a bowl and gave it to Petyr. “Hurry up!” she said. “You’re already late.” She handed Petyr a sack with a thin slice of bread and an apple. “Don’t come back until you find what you’re looking for.” She pushed him out the door. The lock clicked behind him.
Petyr rubbed his eyes.  He wasn’t crying exactly, but he didn’t know what to make of his world changing so quickly.  Yesterday he had a kind mother, food and a warm place to sleep. Today, an old witch who claimed to be his mother tossed him out of the house to make his way in the world. He wiped his eyes and began the only way he knew how, one foot after the other on a gravel road that seemed to whisper, “This way.”
For months, Petyr walked, foraging for berries along the sides of the road, drinking cool water from rivers and streams. At night, he sheltered under bushes deep in the woods, and once, when he thought there might be wolves nearby, he climbed high into a tree and lashed himself to the trunk to sleep.
He thought it odd to have seen no one. Not a person to talk with, not a person to ask a question, no one at all. It was as though he was the only one left in the world, but with all his walking, he grew stronger and more clever, too. He knew
when it was going to rain by reading the clouds. He knew when a predator was near by listening to the birds. And, with all the time he spent alone in thought, he knew what he believed, what mattered to him and what didn’t.  Never had his mind been so clear. In months of wandering and fending for himself, he had changed from a boy into a man. Still, he hadn’t found anything he considered his fortune, and he continued to wander.
In his tenth month of wandering, Petyr came upon a bearded man wearing a straw hat and baggy work clothes, sitting on a wall at the edge of a field. “Hello!” Petyr called.
The man said nothing.
“Hello!” Petyr said louder.
The man slowly turned and gazed into Petyr’s eyes.
“I’ve been seeking my fortune.”
The strange man nodded and began to whistle a song Petyr’s mother always sang. Suddenly, Petyr was homesick and tired of wandering. He turned and began to hurry home, miles and months away.
Arriving home, he found a welcoming mother and a house in a small village he had never loved as much as in that moment. Never had the lilacs by the porch smelled so sweet. Petyr sat in the twilight and watched the stars emerge in the night sky. He discovered his fortune and it was here, in his village and home, but he would never have known except for his journey.

Posted by Snickertales at 5:37 AM