The Ravens and the Swans 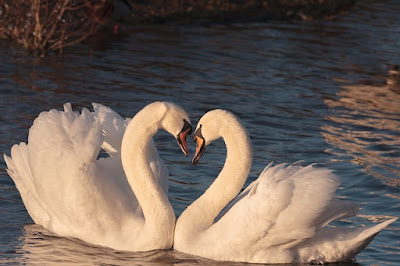 The Ravens and The Swans
By Valerie L. Egar

Two clever ravens lived in an oak tree in a park. They spent most of their time watching people stroll by and listened to their conversations. Soon they learned to mimic speech. They said “Hello,” and  “How are you?” and had fun seeing people look around to see who was talking.
Every now and then, one aimed an acorn for a person’s head while the other cawed, “Look out below!” People always assumed a naughty boy high in the tree threw the acorns, but they wondered why they could never see him. Meanwhile, the ravens flew in circles above the tree, cawing happily at their jokes.
They enjoyed the oak tree and their raven games until two swans settled in the park’s lake. The swans looked elegant and swam with such ease, the water hardly rippled. People admired them and so did the ravens. Unlike the swans, the ravens couldn’t swim and though they glided on air currents, no one ever called them graceful.
The swans loved their lake. They swam among yellow water lilies and spent their days eating marsh grass and water hyacinths. When they felt tired, they drifted lazily. They slept in the water, allowing the current to gently rock them to sleep.
The swans were content until they heard the ravens cackling in the oak tree, teasing  passers-by. Being a swan was hard work— everyone expected a swan’s feathers to be snowy white. It took hours of grooming to get their feathers just right.  Being a raven seemed like a carefree life— the ravens made everything fun.
One day an odd man visited the park. He sat on a bench and watched the swans. He noticed the ravens, too. When they called “Hello,” instead of looking around, he simply answered, “Hello, ravens. How are you today?”  The ravens looked at each other. How did he know?
As the swans swam back and forth, the man enjoyed watching them and he sensed they envied the ravens’ carefree ways. He listened carefully to the ravens cawing in the trees. “Hmm,” he thought. “The ravens envy the admiration the swans receive for their gracefulness.”
The man wasn’t sure he should meddle, but the sun was hot and he was bored. He waved his hands and said a few words no one heard. All of a sudden, the two swans turned into ravens and found themselves high in the oak tree. The ravens turned into swans and found themselves gliding gracefully in the lake.
For the first few hours, the new ravens said, “Hello” and “Hi” over and over.  They tossed every acorn they could find on peoples’ heads and took turns screaming, “Look out below!” They flew high into the clouds and glided on air currents.  When it was time for bed, they headed for the water and then remembered they weren’t swans anymore. They perched on a branch. Unlike water, the branch didn’t rock them back and forth gently. They couldn’t sleep.
The ravens who turned into swans spent the first few hours grooming themselves. Every time they thought their feathers were spotless, they found another speck of mud or a piece of green algae. “This is impossible!” they grumbled. “There’s no time to play!”
They enjoyed swimming for a little while, but each time water plants brushed against their legs, they jumped. They imagined catfish whiskers and slimy water snails, leeches. The water didn’t seem inviting at all, now that they thought about what might be lurking there. How could they possibly fall asleep with all those things swimming around them in the water? The only thing they wanted was to be ravens again.
The cathedral bells chimed twelve times. Midnight. Whoosh! All of a sudden the ravens and the swans transformed into their true selves. The swans were happy to find themselves in the water where they could finally sleep. The ravens were happy for their sturdy tree branch with no fear of water creatures nibbling at their feet. The ravens and the swans were grateful for a good night’s sleep and happy to be themselves.
Like the story? Share with your FACEBOOK friends, comment and 'like.'
Copyright 2018 by Valerie L. Egar. May not be copied, reproduced or distributed without permission from the author.
Published April 22,2018 Journal Tribune Sunday (Biddeford, ME).

Posted by Snickertales at 5:33 AM