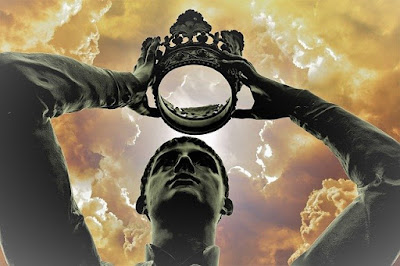 Prince Avar was destined to rule the Kingdom of Firth, his coronation was written in the stars. Knowing he would someday be their king, the people of Firth watched him grow. They hoped to see leadership and compassion. They wished for kindness and courage.
Instead, they noticed Avar was fierce and, when he didn’t get his own way, ruthless.  He liked power, but his heart was not tempered with love. He didn’t feel joy. Like most tyrants, he never laughed. The citizens of Firth bemoaned the day when Avar would become king.
Deep in the woods in a lonely part of the Kingdom, a wise old woman sat at a primitive table and observed Avar in her crystal ball. She knew it was best not to meddle in the affairs of humans and usually, she refrained. Still, Avar’s behavior pained her and she saw terrible destruction ahead if he became king.
The woman had the power to move rivers and crumble mountains, but there was one thing she couldn’t do. She was unable to change a human’s heart— only Avar could change that. Since she couldn’t cast a spell and change Avar into a different kind of person, she did what was within her power. She turned him into a lion. 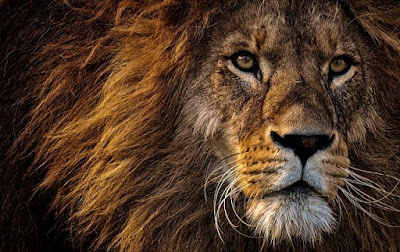 The lion was fierce as Avar had been and people ran from him. For twenty years, the lion wandered, King of the countryside. He hunted and roared, proving himself the most powerful of beasts.
But, as Avar began his 21st year as a lion, he found himself circling the city more often, trying to glance in people’s windows to see what they were doing. He began to remember stories his father told him and wished he’d paid more attention. He listened for music and people’s laughter. He didn’t understand laughter. Lions roared and growled. Lions coughed and sneezed. Never did they laugh.
All this time, the old woman had watched the lion in her crystal ball. She smiled when she saw Avar sitting at the edge of the city watching people. “It’s time,” she thought. 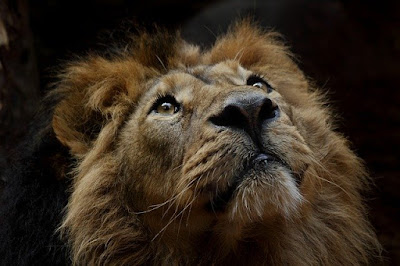 The following day, as the lion wandered through the forest, he came upon the woman. He roared, but the woman was unafraid. “You’re wondering what it will take to become human again, aren’t you?
Avar nodded. It had crossed his mind more than once.
“Already your heart is changing,” she said.  “You yearn for laughter and companionship. You’re thinking about other people, not yourself.”
“How will it happen?” he asked.
“Sudden as a streak of lightening,” she said. “I don’t know when, but I suspect it will be soon.
Instead of trying to pounce on the crows in the field the next day, the lion watched them. He noticed their dark feathers gleaming in the sunlight and how one cawed loudly and called the others to eat.
From a distance, he watched a man lift his old dog into a cart and pat its head gently.
Avar began to notice more and more: three children, sharing a bag of candy. A flower blooming between the cracks of a rock. A horse licking its newborn foal. An old shepherd leaning against a tree, face to the sun.
The lion felt fluttering in his chest he’d never before felt.
He continued observing, aware that in all his years, he’d noticed so little. His heart started to fill with love for all he saw around him.
One day, as he lay in the sun, a fly landed on his tail. He tried to swat it, but could not reach the tip of his tail. He stood. Round and round he went, chasing his tail, trying to catch the fly. Faster and faster he spun until he was dizzy. All of a sudden, he rolled down a hill.
Avar closed his eyes and started to laugh. He laughed and laughed and, as he laughed, his heart pounded harder and harder. All of his fierceness fell away and when he opened his eyes, he was transformed back into a man. His heart was new and worthy of a King who would lead his Kingdom with compassion.
Like the story? Share with your FB friends, 'like' and comment.
Copyright 2017 by Valerie L. Egar. May not be copied, reproduced or distributed without permission from the author.
Published November 12, 2017, Biddeford Journal Tribune (Biddeford, ME).

Posted by Snickertales at 10:22 AM No comments: