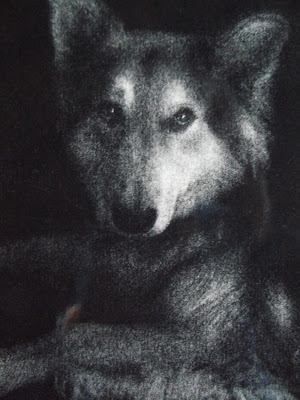 Melissa stood in the doorway and started to cry. Melchinor, the orphaned dragon her Dad brought home for her to raise, had just stretched his newly budded wings and took off for town. That a new species of dragons from Iceland had established a lair in a cave at the top of a mountain in our northern Maine town was a secret. Only Melissa, her Dad, his girlfriend, Ms. Quirkhorn, and I knew.

Though Melissa's Dad could have easily become famous for his discovery, he knew the dragons would be hunted for trophies and caged in zoos. Our beautiful mountain wilderness would be destroyed by dragons seekers. We had to catch Melchinor before anyone in town saw him.

"Come on! Hop in the truck!" Mr. Gibbons grabbed his keys.

I jumped in the cab with Ziti.He was huffing and yelping, smoke blowing from his excited dragon nose. I was starting to see that raising a young dragon was going to be harder than I'd thought. What would I do when Ziti's wings started to grow?

Melissa scrambled in, carrying Melchinor's favorite toys: his squeaky knight and chewy bone.  We rolled the truck windows down and tried to glimpse Melchinor flying over the trees. The moon was full and silvered the woods. Melissa squeezed the squeaky toy over and over and called his name, but we didn't see him.

When we got to town, the streets were quiet. Jeb's 24/7 was the only place open and nothing was going on there. We rode up and down the streets, looking in trees and on rooftops, but saw nothing.

"Maybe we should walk around and look for him," Melissa suggested.

While he was on the phone with Ms. Quirkhorn, I had an idea. If it was OK with Mr. Gibbons, maybe Mom and Jenna could help, too. The way I saw it, they were going to figure out that Ziti was a dragon sooner or later. They'd keep the secret, I knew they would.

Mr. Gibbons hesitated when I asked him, but we had a lot of streets to cover, and he agreed that Mom and Jenna would find out the truth about Zita soon enough. While he parked the truck, I ran into the house. Mom had just gotten home from the office and Jenna was upstairs doing her homework.

"Come quick!" I yelled."I don't have time to explain, but we need help."

Jenna came down the stairs and rolled her eyes. "What is it now?" Mom looked at me expectantly.

"Melissa's dragon, Melchinor, flew off tonight. He's somewhere here in town and we have to find him before anyone else does."

Mom looked at me. "Terry, it's not like you to make up things to get attention. What's going on?"

Mr. Gibbons and Melissa came inside. "I'm afraid it's true, Ms. Campbell. I'll explain later, but it's really important we find Melchinor as soon as possible. He'll be in danger otherwise."

"More exciting than algebra homework!" Jenna said. "Tell me what to do."

As Mom put her sneakers on, Mr. Gibbons explained that Melchinor was friendly and that the goal was to get him back to the truck without anyone seeing him.

We split up to walk around town, listening for unusual noises. I walked Ziti on his leash and whistled softly, hoping that if Melchinor heard, he would come. The fallen leaves crunched under my feet and the air  felt nippy.

When I came to Main Street, I heard a siren and saw flashing blue lights headed our way. Sheriff Joe's car skidded to a stop in front of the hardware store. Melchinor was sitting in the parking lot, glowing in the moonlight, preening his wings.

Published in The Sunday Journal Tribune, November 29, 2015. Copyright 2015 by Valerie L. Egar. May not be copied or reproduced without permission from the author.

Posted by Snickertales at 6:22 AM No comments:

"What's the secret?" Mrs. Tufts asked. She was standing behind us and we didn't know how much she'd heard about the dragons Melissa's Dad had discovered in the mountains. All we knew was that she'd heard the word 'secret' and her nosy radar activated.

Melissa looked frightened. News about the dragons couldn't slip out or their lives would be in danger. I stood up and looked Mrs. Tufts in the eye. "Melissa and I are planning our Halloween costumes. We're thinking about being dragons." I wasn't lying, Halloween was still a few weeks away and being a dragon had crossed my mind.

"Oh." She was disappointed. "But, I heard Melissa say her Dad didn't want anybody to know about the dragons."

"He wants us to keep our idea secret, so people are surprised. You're not going to say anything, are you?"

"Me? I'm like First Knox when it comes to secrets."

More like a TV broadcast, I thought, but I smiled.

She looked at Melissa. "Are your Dad and Sandy Quirkhorn still seeing each other?"

Melissa's mother died a few years ago and now I understood how Ms. Quirkhorn knew about the dragons.

"Yes," said Melissa. Her voice could have flash frozen vegetables.

"And your mother, Terry? Is she still working late?"

Mom was the target of a lot of Mrs. Tufts' gossip. I'd overheard comments that my sister Jenna was "practically raising me," and that Mom "spent more time at work than with her children." I wanted to say "Why do you ask?" but I knew that would only prove that I wasn't being raised properly.  I said, "Yes" and let it go.

Melissa was pale as Mrs. Tufts walked away.  "That was close."

The following day, Melissa invited Ziti and me to her house to meet Melchinor. I rode my bike out of town and up a country road that turned to dirt. Ziti galloped along next to me, on a leash. Melissa's house was an old Cape Cod at the end of a long driveway, at the foot of the mountains.

Melchinor greeted Ziti with a few huffs. He was bigger than Ziti and had translucent wings that grew from his shoulders. As they scuffled in the yard, I asked Melissa, "Is Ziti going to grow wings?"

Now I was worried. When Ziti grew wings, everyone would know he wasn't a dog. Melissa was far enough from town that no one ever saw Melchinor, but it would be a problem for Ziti.

Melissa waved off my worry. "Get him a cute dog coat. It will fit over his wings and no one will know."

Dress Ziti up the way a girl would dress a poodle? I'd get teased for sure, but I'd do just about anything to protect the secret.

Melissa's Dad came hiking down the mountain as it started to darken. He rubbed Ziti under the chin. "You're a handsome guy," he said. "I have to wonder how you ended up at the shelter."

I shrugged. Aside from saying he was a stray, the shelter wasn't able to tell us anything about him.

Mr. Gibbons invited me in. Melissa led the way and Ziti and Melchinor scrambled in after us. As he made pizza, he explained more about the dragons. His theory was that several had flown from Iceland to northern Maine.

"I'd always thought that dragons were make-believe."

Mr. Gibbons shrugged. "Many animals we thought were mythical may exist in remote areas of the world. Think about it, Terry. Since ancient times, people in many different cultures have drawn pictures of dragons. If they never saw one, why do the pictures look similar?"

Melchinor scratched at the door and huffed. "Melissa, I think he needs to go outside," Mr. Gibbons said.

I understood. I'd missed the clues once or twice and quickly learned that cleaning up after a dragon is NOT fun.

When she opened the door, Melchinor yelped, spread his wings and flew over the trees towards town.

Published in The Sunday Journal Tribune, November 22, 2015. Copyright 2015 by Valerie L. Egar. May not be copied, reproduced or distributed without permission from the author.

Posted by Snickertales at 6:58 AM No comments: