The Other Side of the Doors 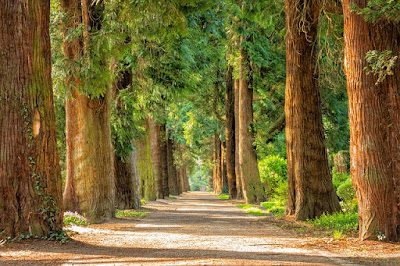 The Other Side of The Doors
By Valerie L. Egar

A thin boy stood before double oak doors, his head downcast. The doors, carved with scrolls and flowers, towered over him.  A large owl door-knocker made from gold glowed on the left door, a silver dragon knocker bared its teeth on the right. Crystal doorknobs glittered in the sun.
No one could tell the boy what was behind the doors. Long ago, the doors supposedly opened to allow a wise woman and a herd of gentle deer to enter. A brave wounded warrior was granted entry according to legend. But those who entered never came out, so people could only imagine what marvels lay behind the doors, and all they could tell the boy was what they imagined, not what was really there.
Each person’s story was a little different, because each person imagined  what she liked best. Chocolate for breakfast, every day! Every book in the world in a great library with comfortable chairs. Rose gardens that went down to the sea. Endless green fields and avenues lined with stately trees. Everybody told a different story. When the boy asked if there were dogs, people who liked to play chess, and  ripe mangoes all year round, the people he asked paused and then replied, “There must be, of course. Behind the doors, everything is perfect.”
Every day, hundreds of people stood in front of the doors, knocked and waited.  Some knocked timidly, hardly making any noise. Others pounded on the doors, yelling, “Hello, hello!” A few twisted the crystal doorknobs and pushed gingerly against the doors, but they were always locked tight and did not open.
Every May for several years, the thin boy journeyed from his village to stand before the tall wooden doors and seek entrance to whatever was beyond like everyone else. The first year, he knocked on one door and then the other and waited patiently, but the doors did not open. The following year, he decided there must be a trick to it, so instead of knocking on both doors, he chose the left door and rapped loudly with the owl knocker. Nothing. The next year, he chose the dragon knocker. Nothing. When he arrived the year after, he avoided the door knockers and pounded on the bare wood with his fists. Nothing.
Standing before the doors once more, trying to decide how to knock so the doors would open, the boy stepped aside to think.  He sat under a tree and for several hours watched people. He saw a few utter what they believed to be magic words before knocking. Others approached the doors soberly, thinking their seriousness might affect the outcome.  One or two boys goofed around when they knocked, which brought scowls from the people waiting behind them.
The boy, growing more interested, listened to conversations. He heard people talking about how happy they would be on the other side of the doors. Their worries would disappear, they said. Life would be easy, no troubles at all. It seemed many of them spent more time thinking about the other side of the doors and imagining how much better it would be than paying attention to all they had around them.
For the first time in a long time, the boy laughed. He realized that everyone who knocked on the doors wanted to be some place other than where they were, and he knew if they weren’t happy on this side of the doors, they weren’t going to be happy on the other side of the doors, either.  Maybe that was why the doors didn’t open. You had to be happy with yourself no matter where you were and only then might the doors unlock.


The boy picked up his satchel and began to walk back home, thankful for the warmth of the sun, the colors of the distant mountains and the scent of meadow grass.
Like the story? Share with your friends on FACEBOOK, 'like' or comment.
Copyright 2018 by Valerie L. Egar. May not be copied, reproduced or distributed without permission from the author.
Published May 6, 2018 Journal Tribune Sunday (Biddeford, ME).
Posted by Snickertales at 5:18 AM