What the Moon Sees 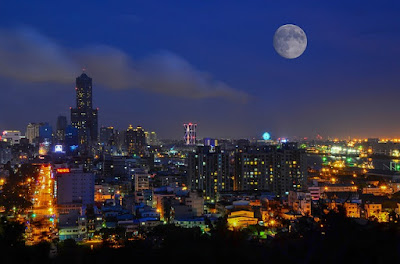 What the Moon Sees
By Valerie L. Egar

As night falls and the stars come out, the moon spreads her silvery light over the earth. Lights click off house to house as people fall asleep. The moon peeks in windows and finds babies asleep in their cribs and children tucked into bed dreaming. Parents are also fast asleep, most in beds, but the moon sees a few snoozing in front of TV sets and one snoring on a couch with a paperback book across her chest.
Midnight. Most people and little creatures are sleeping, but not everybody!
In a garden, a bunny nibbles delicious lettuce leaves. The moon sees him hop from the lettuce to the beans.
On the interstate, a trucker turns the radio up and steps on the accelerator. He has the road to himself, which is why he likes driving at night. He’ll be in New York by six.  High in the sky, the moon watches his truck drive south.
The moon shines in a window of a big city hospital where a nurse takes a patient’s temperature. She sees the moon high in the sky, a beautiful silver pearl, and smiles.
In a small green bedroom, a girl tosses and turns. She’s a gymnast and is nervous about a match she’s attending next week. Though she’s won local competitions, she’s worried she might not measure up in a regional one. The moonlight makes a few of her trophies sparkle and the girl’s worries ease.
In another bedroom in a different town, a boy sits in the dark with a flashlight, reading a comic book. The moon is so bright, he turns his flashlight off to save the battery and read by moonlight. “Thank you moon!”
No one but the moon notices the mouse nibbling the birdseed on the ground by the bird feeder.
No one but the moon glimpses the dolphins playing tag in the ocean.
A grandmother sits at the kitchen table with piles of old photographs and an album, arranging them carefully, writing names and dates.  When she stands to make another cup of tea, she looks out the window and sees the moon. The moon sees her, too.
A student rubs his eyes and types on his keyboard. He’s talking to a friend in India, even though he’s supposed to be sleeping. The moon sees, but she won’t tell.
The porch is comfortable on a warm spring night and the man sits and listens to the peepers. He watches the moon through the pines and glimpses his neighbor’s cat hunting in the field.  Moonlight silvers his aging hands.
The woman and her collie walk briskly. Her dog needs a nice long walk and she worked late today. The woman is glad for the moon lighting their path through the park.
A police officer drives his patrol car up one street and down another. The sky is beginning to lighten. The moon is falling lower in the sky, but she still lights the quiet streets.
“You want another cup?” the waitress asks the man sitting at the counter in an all night diner.  She holds a pot of hot coffee.
“Sure,” he says.
She pours a cup and steps outside for quick break. The air smells sweet and she watches the moon fade in a pink sky.  The world is waking up. It’s time for the moon to go to sleep.

Posted by Snickertales at 9:13 PM