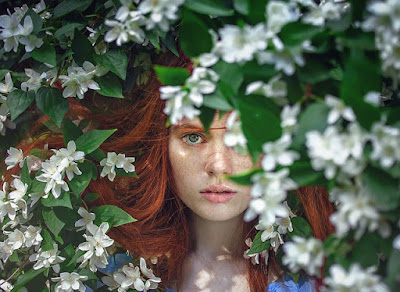 A long time ago, long before television and computers were invented, long before automobiles sped on superhighways and airplanes flew across the ocean, a young woman with long red hair and green eyes lived in a beautiful village near the sea.
Her family was rich and the girl grew up with all the finest things. She ate from plates hammered from pure gold and dressed in luxurious silk. Sapphires and emeralds glittered on her fingers. When she was a child, jugglers and famous magicians entertained at her birthday parties. As she grew older, noted musicians played concerts for her and her friends. She escaped summer heat on a sailing ship and warmed herself in winter with endless pots of hot chocolate topped with whipped cream.
Her parents sheltered her from birth and the girl had no idea that others were less fortunate. The girl rode in a carriage and passed children dressed in rags. When she asked why they were dressed that way, her parents said, “Oh, they must be going to a party. What original costumes!”
When she saw people standing in a breadline, her tutor told her it was how people got fresh air and sunshine.
For the girl, every sad reality was masked with illusion and, over the years, she learned to make up stories similar to her parents’ and teacher’s. A crying child wasn’t sad— he was having fun imitating a coyote with his howls. How easy it became to change something that made her feel distressed into something pleasant and amusing!
One day, a crone who could read people’s hearts walked through the village. She was elderly with her long white hair covered and her blue eyes clear as a mountain lake. Her legs ached from the miles she’d walked and she sat at the edge of the road to rest and eat a small portion of bread and cheese she carried in her pocket.
The rich young woman was passing by in her carriage. Though she had never asked the carriage driver to stop, she did on this day.  She’d looked from the carriage window to see a noblewoman having a picnic. Perhaps the old woman would like some company, she thought.
The young woman curtsied to the crone. “Good afternoon my lady.”
The old woman knew the girl, through no fault of her own, could not see her. Though she sat before her in flesh and blood, dressed in worn clothes, fingers gnarled from hard work, she perceived that the girl saw something quite different. 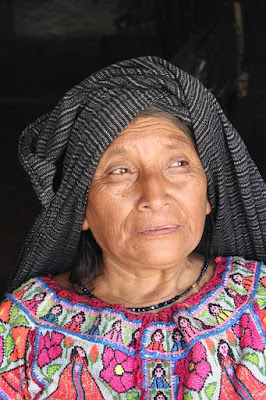 Some people might be flattered to be seen as a noblewoman, when their birth was humble. Some might not mind having the wooden buttons on their dress perceived as golden pearls. The crone was not one of those people. She wanted the girl to touch her hands and understand she’d labored in farm fields and earned the callouses on her hands. She wanted the girl to see the dress she wore and know she’d made it from wool she had woven herself. She wanted the girl to taste the stale bread and the hard cheese and not pretend it was cake.
She offered a slice of bread to the girl.
The girl bit the bread. “What delicious—.” She stopped. The world spun and she thought she might faint. She sat in the grass and held her head. When the girl opened her eyes, the world was entirely different. She saw the old woman and understood her triumphs and her pain. She admired the skill of her embroidery and the cleverness displayed by making buttons from wood. She pressed a few gold coins in the old woman’s hands. “Thank you, Auntie.”
The girl took a slow carriage ride through the village. All her illusions and make believe stories had fallen away. She saw things that made her so sad she wanted to cry, but also things that filled her heart with love. Never had she felt so alive. She felt the remainder of the slice of bread in her pocket. Just enough left for her parents and her teacher, too.

Posted by Snickertales at 9:44 PM