The Elephant and the Boy 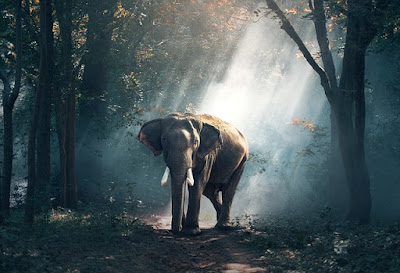 The Elephant and The Boy
By Valerie L. Egar

A long time ago, a young boy named Dev lived in a small village in a country where flowers bloomed year round and spices scented the air. In  monsoon season, rain turned streets into rivers. In the dry season, days were so hot, even cobras uncoiled themselves in the shade and forgot their cobra ways.
Every day, Dev walked to school at the edge of the village. Most days, he listened to the teacher, a strict man who drilled the class and was quick to notice any student whose eyes drifted to the open window.
“Master Dev!” the teacher called one afternoon, startling Dev from a daydream. “Perhaps you can explain this equation?”
“No, sir.” The class giggled.
“The second time this week, is it not?”
Dev nodded.
The teacher sat at his desk, pulled a piece of paper from his drawer and began to write. “You will take this letter to your father. I wish to see him tomorrow.”
Though Dev’s father was kind, he would not be pleased with a note from the teacher and Dev was ashamed to go home. After school, he lingered playing games with the other boys. When they left, Dev walked towards the river on a dirt path, careful to watch for snakes. He threw a few rocks in the water. When he saw the sun sinking lower in the sky, he reluctantly started for home.
As he walked up a hill, his foot caught in a tree root. His ankle twisted. “Ow!”  He tried to stand, but couldn’t. He ankle felt tight and began to swell. Dev dragged himself to a tree and leaned against the trunk.  He was far from the village. Even if people searched for him, he wasn’t sure they could find him.
Night was dangerous. A tiger or leopard might come to the river to drink and see him, helpless.  A crocodile might leave the river and try to eat him. Dev was alone and scared. 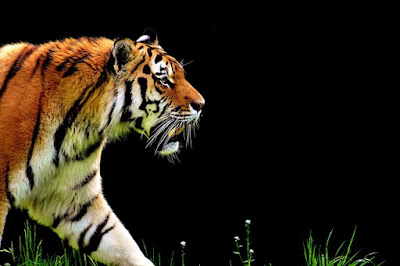 He heard heavy footsteps and rustling in the bushes.  An elephant! Huge and grey, the beast that was approaching towered over him and could easily crush him.  Dev pushed his back against the tree and tried to make himself invisible. 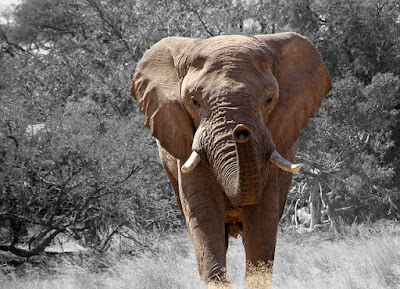 The elephant stopped. She saw him. Dev closed his eyes, expecting the worst.  Instead, he felt the smooth skin of the elephant’s truck patting his arm. Dev gently extended his hand and rubbed the elephant’s trunk. All of sudden, he didn’t feel as lonely.
Though Dev expected the elephant to leave, she guarded him all night, protecting him from predators. In the early morning light, Dev heard voices.
“I’m here!” he shouted. The elephant, hearing people approach, lumbered towards the river.
Many years later, Dev had a fine house and children of his own. He told the story of the elephant to anyone who would listen. Some believed, others thought a frightened boy imagined an elephant friend, but Dev knew the elephant was as real as he.
One day, two men drove an elephant in chains through the center of the village. Dev heard the noise and ran to the street. “What are you doing with this poor creature?” he demanded.
“Selling her to a circus. She is worth a lot of money.”
“Yes,” said the other. “We worked hard to catch her. She will bring a fine price.”
Something about the creature was familiar, even though so many years had passed. But, Dev thought, even if it is not the same elephant, I must save her. He’d never forgotten the comfort of the gentle pat when he was scared and alone. 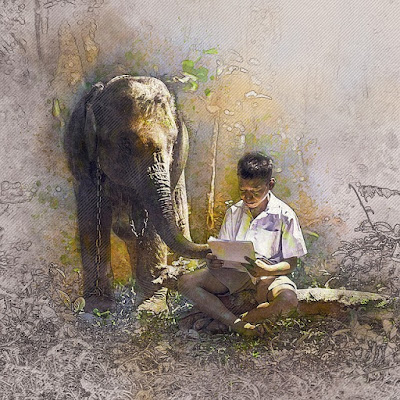 “Whatever the circus agreed to pay, I will pay you double.”
The men considered.
“And, because  you need work, I will give you jobs.”  Dev did not want the men capturing and selling elephants ever again.
The men agreed and walked the elephant to the edge of town.
“Unchain her.”
Freed, the elephant paused and raised her trunk to pat Dev gently on the shoulder and turned towards the river. 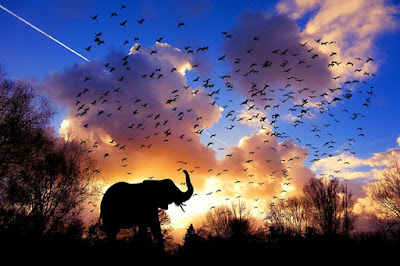 Posted by Snickertales at 6:10 AM