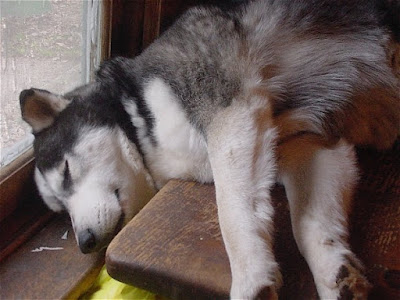 As soon as they stepped into the house, the young dog ran room to room exploring his new home. Tail up and nose to the floor, he circled the sofa. He sniffed  the fireplace screen and the tall plant in the corner of the living room. In Ryan’s room, he spent a few minutes looking under the bed.
Ryan rolled a tennis ball towards the husky, which the family hadn’t yet named. “You like this?”  The dog ignored it and stuck his head into the bathroom.
“C’mon,” Mom called from the kitchen. “Water.” She swished her fingers in the metal bowl for the dog to hear and put the bowl on the floor. He ran into the kitchen and took a long drink.
“I like the name Togo,” Mom said, not for the first time.
“What’s wrong with Sinatra? That’s what they called him at the shelter.” Dad pat the dog’s head.
“What’s a Sinatra?” Ryan asked.
“Not what. Who. A famous singer who had blue eyes, Frank Sinatra.”
Ryan wrinkled his nose.
“We can wait a while to name him. Let’s see what fits.”
Finished drinking, the dog spotted the large wooden table next to the windows. With one easy leap, he jumped on top.
“No, no,” chided Mom. “No table.”
The dog stood, looking out the windows. A large expanse of fields. A view of the driveway. If he was going to protect the house, this was the place to be!
“Off the table,” Dad said and the dog complied. He had other rooms to explore.
Later that evening, the family went to a restaurant for dinner. Coming home, Ryan spied a furry face at the kitchen window as they pulled into the driveway. He hoped Mom didn’t see, but when they went into the house, their new dog was still standing on the table, wagging his tail, happy to see them.
“You were waiting for us, weren’t you boy.” Ryan grabbed a biscuit and called him.
“I’m not sure I like him jumping on tables,” Mom worried.
“He can’t see outside, except from the table,” Dad pointed out.  “He hasn’t jumped on the table in the dining room and won’t. It isn’t near a window.”
Mom wasn’t convinced, but she soon learned Dad was correct.  The dining room table, at the center of the room, held no interest for the dog. He liked positioning himself under the table when they were eating, hoping for a scrap or two to drop, but he never jumped on the table.
The kitchen table was a different story. Though the dog gave up the table for the family’s breakfast, the dog viewed it as his for the rest of the day.
They bought him a nice soft dog bed. “That will do the trick.”
Though the dog enjoyed sleeping on his new bed at night in Ryan’s room, he still spent most of the day on the table.
From the table, the dog watched wild turkeys in the nearby field and occasionally, a white tail deer.
From the table, he caught the first glimpse of Ryan walking up the driveway from the school bus and got ready to greet him.
From the table, he saw the delivery man put packages at the door and barked.
From the table, the dog guarded and protected the house and the family.
“Maybe we should call him Sentry?” Dad suggested and they agreed Sentry was the perfect name.
“Except when he’s sleeping in a patch of sunlight,” Mom teased because she’d found him more than once fast asleep on the hard table in a puddle of sunshine.

Like the story? Let us know by commenting, sharing with FACEBOOK friends and 'liking.'
Copyright 2019 by Valerie L. Egar. May not be copied, reproduced or distributed without permission from the author.
Published June 8, 2019 Biddeford Journal Tribune (Biddeford, ME).

Posted by Snickertales at 1:12 PM