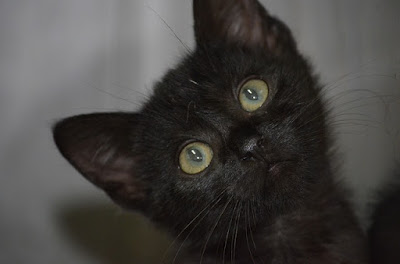 Most people don’t think of a cat as a travelling companion. When Ashra decided to take me with her on her journey, her father shook his head. “You should take a dog, Ashra. It will guard you at night as you sleep by the fire.”
“Why not a horse?” Ashra’s friend Elizabeth asked. “You could ride a horse instead of walking.”
The townspeople laughed. “Foolish girl, not even smart enough to take a nice fat hen. At least she would have eggs to eat. What good is a cat on a journey?”
But, Ashra insisted on taking me. I’m Brackton the Bold, but Ashra calls me ‘Ton-Ton.’ I do as I please, answer when I wish and consider myself rather clever.
I’ve been Ashra’s best friend and companion since she rescued me from a farmer who wanted nothing to do with a black kitten. “Bad luck,” he declared. Ashra didn’t believe that nonsense and took me home and raised me. But for her, I wouldn’t be here telling stories.
In those long-ago days, young men left home to find their fortune. With luck, a boy would have good stories to tell when he returned and perhaps some money. The stories we heard around the fire on a winter’s night were about meeting princesses, receiving gold from kings, battling dragons— the stuff fairy tales are made from.
Ashra listened to these stories and decided she would leave home when she was old enough to find her fortune. How she was ridiculed! It wasn’t something girls did. Her father tried to talk her out of it. Her mother fretted that no boy would ever marry her. And, those who thought it might be acceptable for a girl to go on a journey all agreed— the cat should stay home.
Ashra wouldn’t hear of it. She had a mind of her own. She packed a small sack she could easily carry, hiding a few gold coins in a purse tied inside her belt. She bundled her hair under a floppy hat to protect herself from the sun. She packed bread, nuts, dried fruit and cheese to eat. “You might have to depend on your hunting skills, Ton-Ton,” she whispered.
“No problem,” I thought.  If she liked mice and moles, I could feed her too.
For days, we walked. Dirt roads, cobbled streets in small towns. We crossed rivers. (Actually, I suspect it was the same river and we saw it from both sides as we made our way north.).  We slept on beds of pine needles in the forest and in grassy fields under starlit skies.
“Are you bored Ton-Ton?” Ashra asked.  “I think we should have had some kind of adventure by now.”
Maybe it’s me, but it seemed that as soon as Ashra said that, we came around a curve in the road and were enveloped in mist.  When the mist parted, I saw an inviting cottage. That made me very suspicious. Why, you might ask.
Think of the cottage in Hansel and Gretel.  The children were lost and hungry and all of a sudden, a house made of gingerbread appears? That doesn’t sound like  coincidence to me.
We were hungry for adventure and the house seemed to promise that. A path that twisted and turned led to the front door, which was bright red with a brass door knocker in the shape of a hawk. The shutters were open and bird song seemed to pour from the small house.
Ashra smiled. “Shall we?”
I followed behind her as we walked the twisty path to the house. We passed a garden planted with wheat, sunflowers and millet. No potatoes or turnips? Very strange. Everyone plants root vegetables.
Ashra knocked and in a moment, an old woman came to the door. “A visitor, how nice!”
She looked startled when she saw me. “Oh! I’m afraid of cats.”
“Ton-Ton is very well behaved,” Ashra told her and stepped inside.
Not me. I decided I’d sit in a sun patch on the porch and listen at the window.
“How old are you?” I heard the woman ask.  “And you’re by yourself?”
I crept nearer the window and peeked inside. I watched
the woman as she talked, noticing how she moved her hands. They fluttered back and forth nervously, especially when Ashra mentioned me.

The woman offered Ashra dinner and a warm bed. “What about Ton-Ton?” Ashra asked.
“He’ll be fine outside,” the woman answered. “I’m sure he’ll enjoy hunting for mice.”
The woman’s voice was shrill and raspy. She talked as she set the table for dinner.
“No butter for the bread.” She explained. “Butter doesn’t agree with me, I hope you don’t mind.” She placed a dark loaf on the table.
“I’m grateful for your hospitality,” Ashra replied, ever polite.
“No cheese! I never cared for it. Have some sunflower seeds. They’re delicious.”
I saw Ashra place a few seeds on her plate.
“A few berries, perhaps?”
“Oh yes,” Ashra replied. “I like berries.”
They ate in near silence, the woman cracking sunflower seeds out of their shells with her teeth, gobbling berries in between. I have to say, I expected better table manners.
Ashra picked at her food. I knew she would have enjoyed a tasty chunk of cheese or a fat pat of sweet butter for her bread.
Not long after, the woman announced it was bedtime and showed Ashra to her room. Coming back into the living room, she spun round and round, faster and faster and in a moment, a tiny sparrow had taken her place.
My cat instincts took over and my protectiveness towards Ashra. I wasn’t sure Ashra was safe here. By what magic had this woman turned into a  sparrow? Unseen, I crept through the window and pounced. I held the bird, but it slipped away and flew to the mantle. I leaped to the mantle and a vase of flowers crashed to the floor. Another miss.
I chased the bird around the room, making sure to keep it away from the window, fearing it would fly away. Finally, I cornered it and I did what most cats do. I bit it.
I heard a boom like thunder and felt the room shake. A young woman, not much older than Ashra stood before me.  “I’m Cora,” she said picked me up and hugged me. “You’ve broken the spell!”
Of course, by that time, Ashra had awakened and ran into the room to find out what was going on.
Cora’s story was similar to all those Ashra and I listened to for many years— a witch cast a spell and turned her into a bird as revenge for her picking sunflowers in the witch’s garden. She was doomed to live as a sparrow until the spell was broken.
“You’re my hero! My father’s not rich but he’s a fisherman and he’ll give you lots of fish!”
I don’t want sound impolite, but unlike most cats, I’ve never cared for fish. I left the two young women to a late night of talking and went into the night to hunt.
Like the story? Let us know by sharing with your FACEBOOK friends, commenting and 'liking.'
Copyright 2019 by Valerie L. Egar. May not be copied, reproduced or distributed without permission from the author.
Published in two parts in Biddeford Journal Tribune (Biddeford, ME) on July 6, 2019 and July 13, 2019.

Posted by Snickertales at 10:36 AM