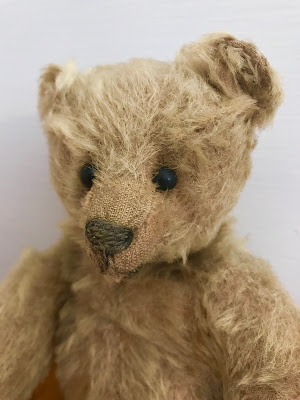 At first the bright light blinded me. I’d been wrapped in tissue at the bottom of a cedar chest in the attic for years. I thought, finally! I expected the people who discovered me would be delighted.
“Was this Grandpa’s teddy when he was little? Or Grandma’s?” they might wonder.
I hoped they’d do a little research and see I was older than that and learn that I was Great Grandpa’s teddy bear when he was a little boy. And then, I imagined they would put me in a special place or at least bring me out at Christmas every year.
“Why did she keep this junk?”
“That bear’s seen better days.”
I don’t have a mirror, but I expect I look a bit raggedy. My fur feels patchy and worn thin in spots. The felt on my left foot is moth eaten and the straw stuffing shows through. My joints are stiff. But my nose is hand stitched! My eyes are deep brown and kind. I’ve got enough age to look distinguished.
“Throw it in the box with the other stuff we’re giving to the rummage sale.”
I feel myself flying through the air and land with a thud on top of a toy train. I think I’d like to go back to sleep in the cedar chest, but I hear the thump, thump, thump of feet on stairs. The box jiggles up and down. Doors open, doors close. An engine starts and stops. Voices.
“Thank you so much. We appreciate your donation.”
Hands sort through the box and I’m tossed in a bin with other stuffed toys. All of them are bright colors – pink, purple, orange. I’m light brown.
All of them are soft and cuddly. I was made from scratchy wool. My straw stuffing feels hard.
I ‘m different from the others and feel out of place.  I don’t think I’ve much of a chance of anyone choosing me.
I comfort myself with memories. My little boy named me Winston when he unwrapped me for his birthday. I was a gift from his mother and she’d tied a jaunty black velvet ribbon around my neck. That didn’t last long. Peter (my little boy) untied it and lost it outside before the day was over.
What fun we had! I rode on a train from Boston to New York City to visit Peter’s grandparents. I listened to stories every night that Peter’s mother read to him. I stayed by his side when he was sick. Peter rescued me from his Labrador puppy, which is how I got the tooth mark next to my nose.
As Peter grew, I saw less of him. Soon he was more interested in footballs and girls, but his mother took care of me and when Peter got married and had a daughter, I became her bear. I climbed trees with Emma and went on picnics in the summer. I sat next to her when she practiced piano. When she went to college, I went too.  We stayed up late studying a lot of nights. I became fluent in French, but don’t remember much of it now.
When Emma got married, she decided I was too frail and precious to be treated roughly. She packed me away and bought other toys for her children. I don’t think she forgot me, but sometimes life gets too busy for old friends and I was only unpacked a few times after that. 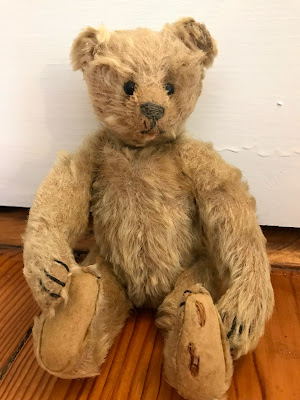 Oh! The rummage sale must be starting. Hands rustle through the bin.
A boy picks me up, throws me aside. "Ugh!"
More hands. “Look!”
“Anja. That one’s got a hole in its foot. Choose a pretty one.”
“I like this one.”
“Here’s a nice blue dolphin.  Maybe you like it better?”
“No. I want the bear.”
“You’re sure?”
“Yes. I love him.”
Love. I haven’t heard that word in a long time.
I feel a hug and the up and down of a girl skipping. Anja. It’s a beautiful name.
Like the story? Let us know by sharing it with your FACEBOOK friends, liking and commenting.
Copyright 2019 by Valerie L. Egar. May not be copied, reproduced or distributed without permission from the author.
Published May 4, 2019 Biddeford Journal Tribune (Biddeford, ME).

Posted by Snickertales at 6:25 AM