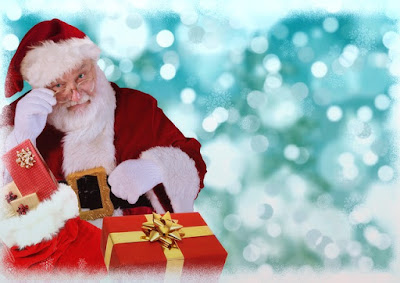 Every year when Santa arrived home from delivering toys on Christmas Eve, he was exhausted. The elves helped the reindeer out of their harnesses and fed them, while Santa made his way to the house and tumbled into bed. Most times, he didn’t even have time to take off his boots before he fell fast asleep.
After a long nap, he awoke to a festive meal with all of the elves. Mrs. Claus was a wonderful cook, but without a good amount of Christmas magic, she would never have been able to serve Santa and hundreds of elves their favorite meals and dessert, because everyone favored something different.
Though Santa enjoyed turkey and Mrs. Claus’ delicious stuffing, the elves’ tastes varied. Spaghetti and meatballs, grilled hotdogs, buttered noodles, pot roast, fried chicken— only with magic was Mrs. Claus able to satisfy everyone.
After dinner, Santa always went to his office and started planning for the following year. “Honey, there’s plenty of time. Relax,” Mrs. Claus said. But, it was impossible for Santa to relax at the North Pole. Looking at snow from the window, he thought of sleds and snowboards and calculated how many he should make for children next year. Walking through the workshop, he sketched plans for new stuffed animals and began designing video games.
Mrs. Claus knew that Santa needed a rest after all his work and that he would relax only if he was someplace other than the North Pole. She talked to the elves and they made a plan for a surprise vacation. When Santa came home from delivering toys and fell asleep, the elves wrapped him in a warm blanket and carried him to an airplane Mrs. Claus hired. Most of the elves climbed aboard too, leaving only a few faithful elves to take care of the reindeer and keep the house fires burning so it would be warm when they returned home.
When Santa awoke, he found himself on a beautiful tropical island in the middle of the ocean. The elves had decorated palm trees with twinkle lights and hung tinsel garlands on the bushes. A huge fir tree the elves hitched to the top of the airplane stood in front of the house, decorated with crystals that sparkled in the bright sun.
Santa, Mrs. Claus and the elves had the island all to themselves, except for a flock of pink flamingos that wandered back and forth on the beach. The white beach sand glittered like snow and it wasn’t long before the elves were jumping waves and playing water tag. “C’mon in, Santa! The water’s warm.”
Mrs. Claus handed Santa a pair of red swim trunks and one of the elves inflated a big inner tube. Santa floated on the water, enjoying the sun until the elves decided splashing Santa would be fun. Hundreds of little hands splashed water in Santa’s direction. Mrs. Claus could hear the elves giggling from the porch where she sat, enjoying the view.
For two weeks, Santa swam, slept in the sunshine and read all the mysteries and fantasy novels he’d been meaning to read. The elves climbed trees, developed a taste for coconut milk, and built sand castles.
When they arrived back at the North Pole, everyone was tan, rested and ready to get back to work. Best of all, Santa had an idea for a new toy— a cuddly fuzzy coconut.  “The elves liked them so much,” Santa said. “And you can play catch with them.”
Mrs. Claus shook her head. “You already have cuddly soccer balls and footballs. What about a cuddly pink flamingo?”


Santa smiled. “What a good idea!” 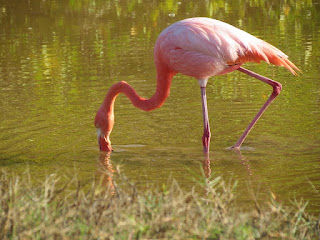 Posted by Snickertales at 8:59 PM