Santa and the Pirates 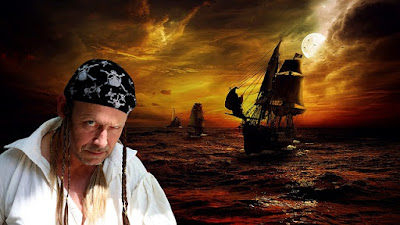 Santa and the Pirates
By Valerie L. Egar

As Christmas grew closer, the pirate crew on the Skull and Cross-Bones felt glum. They knew Santa kept track of those who were good and, as pirates, they never made it onto the good list. No Christmas for them.
Captain Scruff noticed the crew's gloominess.  “What’s wrong with all of you?”
Pirate Sneed raised his hand. “Do you think Santa might visit if we put a Christmas tree on the deck?”
“We could decorate it with seashells.”
“Seaweed tinsel.”
“And a shiny star on top.”
Captain Scruff’s face turned bright red.  He shook his saber in the air and  yelled, “We is pirates! We is BAD! Santa don’t like BAD. And, pirates don’t like Santa!” With that he broke into his favorite Christmas song,
No presents, no singin’, no Christmas tree
Mischief and mayhem’s the life for me.
Proud to be a pirate! Nasty, stinkin’ seadog!
Oh, ho, ho.

We top Santa’s bad list every year
Thievin’ and connivin’ far and near.
Proud to be pirates! Nasty stinkin’ seadogs!
Oh, ho, ho.

If we found Santa, we’d walk him down the     plank,
Steal all the presents, laugh as Santa sank!
We’re proud to be pirates! Nasty, stinkin’ seadogs!
Oh, ho, ho.”

The Captain looked at his crew and caught Rook and Brinks wiping their eyes. “Is you two crying?”
“I’m remembering my Mum’s gingerbread,” whispered Rook.
“I’m thinking about my stocking filled with candy and little toys,” sniffled Brinks. “I had one every year. Until I became a pirate.”
The whole crew started to chatter, remembering special presents and happy songs, homemade cookies and twinkling lights.
“Enough!” shouted Captain Scruff.  “New rule— NO TALKING about Christmas. NO THINKING about Christmas. NO REMEMBERING past Christmases. Understand? Back to work scurvy dogs!”
But, no matter how many rules Captain Scruff made, he couldn’t keep the crew from dreaming about Christmas. He couldn’t keep the crew from longing for the feeling inside some people call “Christmas spirit.” And, he couldn’t keep himself from thinking about Christmas either.
When they visited a town, Sneed found himself carrying packages for a young mother whose hands were full. Brinks stopped by the local humane society and left a bag of pirate’s gold to buy food for the animals. Rook noticed litter in the park and spent an hour picking it up. Even Captain Scruff snuck off and bought a ton of books for a school library. The weeks leading up to Christmas were filled with pirate kindness and good deeds.
Not one of them expected anything in return. They were pirates after all, and pirates they would remain. Once the new year started, they’d be back to thieving and conniving. But, for the time being, they enjoyed the surprised smiles from people who expected only trouble from pirates. They felt warm inside from the “thank yous” they heard. When they were offered mugs of hot chocolate for stringing lights on a tall Christmas tree in the village square, they almost cried.
On Christmas Eve, the pirates went to bed.  From the ship, they listened to distant singing in the village.  Sneed thought he heard sleigh bells, but then he fell fast asleep.
In the morning, Rook found a small package at the foot of his bed. “Santa?” He unwrapped it. A pocket watch! Now he’d know when to go on duty.
Sneed unwrapped a game of checkers and Brinks a sturdy pair of boots. Every pirate received a gift from Santa, even Captain Scruff who opened a small package to find a new spyglass. Maybe they weren’t entirely bad, after all.
The cook was in a cheerful mood with his crisp new chef’s hat. He roasted a turkey and made three different kinds of pies. Despite the presents, no one knew whether the Captain still forbade any mention of Christmas.
Captain Scruff stood and raised his glass. “I’ve written a new verse for the pirate’s Christmas song,” he said. “No walkin’ the plank for Santa. I’ve taken that verse out.”
“Let’s hear,” the crew shouted.
We’ve got the Christmas spirit head to toe
And wish everyone a Merry Christmas even   though
We’re pirates! Nasty stinkin’ sea dogs.
Oh, ho, ho!
Like the story? Share with you FACEBOOK friends, 'like' and comment.
Copyright 2018 by Valerie L. Egar. May not be copied, reproduced or distributed without permission from the author.
Published December 22, 2018 Biddeford Journal Tribune (Biddeford, ME).

Posted by Snickertales at 2:55 PM