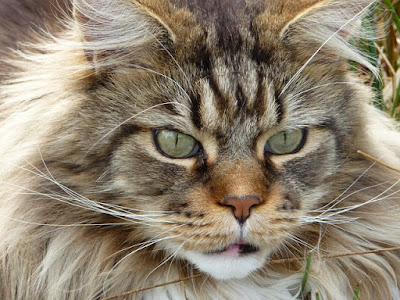 Josh invited his friend Jaden to stay overnight. He was coming at 5:00.
Josh looked around his room. Games and game pieces covered his top bunk. Magazines and papers littered his desktop. Dirty clothes hung over his chair. Books and little cars cluttered the floor. Worse, a funny smell wafted from under the bed.
“I’ve got lots of work to do before 5:00,” he said to his Maine Coon cat, Broomtail. “Want to help?”
Josh climbed to the top bunk and put the game boards and pieces back in their boxes. Broomtail joined him and sat in a box. “Broomie, that’s no help. Out.”
Broomie swiped Josh’s hand.
“You can’t sit in the box.” Josh gently pushed Broomie out. Broomie stretched. He found a plastic man and a domino near the pillow and swatted them. They fell on the floor. Josh sighed. “You’re not helping!” Josh climbed down to pick them up.
Broomie yawned, jumped into the lower bunk and nestled on the pillow as Josh finished clearing the top bunk. He put clean sheets on the mattress.
Josh decided to put clean sheets on the bottom bunk, too. “C’mon Broomie, move.” He lifted him off the bed. Broomie jumped back on. 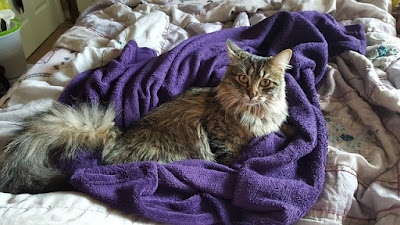 “No. Let me get this done first.” He lifted him off again.
Broomie walked around the room as Josh fitted the bottom sheet onto the mattress.  As Josh opened the flat sheet to spread on the mattress, Broomie jumped on the bed. He was quick and landed under the sheet. Now there was a Broomie lump in the bed. Josh pulled the sheet off.
“Broom-cat, you are NOT helping!” He put Broomie on the floor and quickly made the bed. “You can go back to sleep now.” Josh patted the mattress, but Broomie had other ideas. He discovered a reel of string on a shelf that Josh used for his kite. String was fun! Broomie knocked it on the floor and it unwound, bouncing over the little cars on the floor. Yards of string tangled in the car wheels as the reel rolled under the bed. 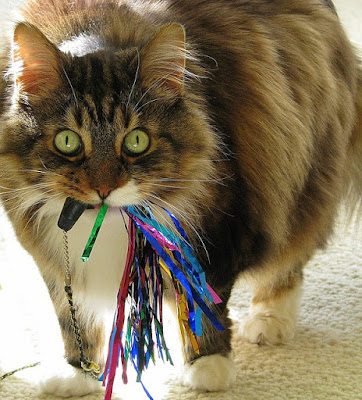 “Broomie! You’re making more work.” Josh snipped the string with his scissors and threw it in the wastebasket. Broomie jumped after the tail end and knocked the wastebasket over, spilling everything onto the rug.
“Enough!” Josh yelled, frightening Broomie. He jumped onto the desk and skittered across the desktop, sending magazines, markers, pencils and glue stick flying.
Josh sat on the edge of his bed and put his head in his hands. His room looked worse than ever. He looked at the clock. 3:30. He didn’t have much time left.
Josh picked up everything that had been in the wastebasket and dumped it in the garbage barrel in the garage. While he was there, he grabbed a cardboard box and put all his toys, books and dirty clothes in it. “Not the best way to clean up,” he thought, “but it works for now.”
Broomie jumped in the box and made a bed on the dirty clothes. “That’s not helpful!” Josh slid the box into the closet and started to close the door. Broomie jumped out.
After Josh piled his school supplies neatly on his desk, he fished shoes and socks out from under the bed. He discovered what smelled bad—  hummus and carrots he took out of the refrigerator for a snack. Was it three weeks ago? Four? Down to the garbage barrel again. Finally, he was ready to vacuum the rug.
Broomie was afraid of the vacuum. Josh looked around to see where he was. “Must have gone downstairs,” he thought and switched it on. Broomie flew out from under the bed, scrambled across his desk, sending Josh’s markers flying again. He jumped on the top bunk, but slipped and grabbed onto the sheet with his claws. Broomie landed on his feet, leaving a long tear in the sheet.
Josh looked at the clock. 4:45. He pulled new sheets out of the closet and re-made the bed.  He picked the markers off the floor. “Broomie, you’re a no-help helper.”
Like the story? Share with your FACEBOOK friends, 'like' and comment.
Copyright 2018 by Valerie L. Egar. May not be copied, reproduced or distributed without permission from the author.
Published Journal Tribune Sunday (Biddeford, ME) February 4, 2018

Posted by Snickertales at 9:10 AM