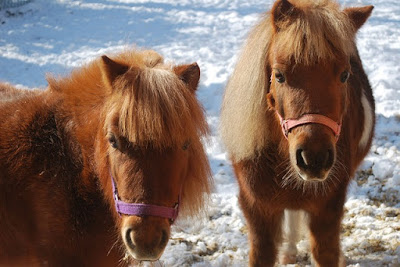 Monique’s Miniature Service Horse
By Valerie L. Egar
Mr. Dean held up his hand to quiet his Fifth Grade class. “Are there any more questions for Monique?”
“Why a horse instead of a dog?” Elle asked.
Monique smiled. “I’m allergic to dogs. And, when I grow bigger, a dog wouldn’t be strong enough for me to lean on and lift myself up if I fall.” Monique sat at the front of the class next to Mr. Dean, her legs in braces. “I can lean against a horse, hold onto its harness and walk.”
“And you can ride it, too?”
“No. Miniature horses are too small to ride.” Monique pointed to Mr. Dean’s desk. “She’s about that high. Small enough to ride in the back of our SUV.”
The class was excited. They were the only class that was going to have a service horse in their classroom with Monique every day. The horse would help Monique get out of her chair and walk. She would go to the cafeteria with the horse, and to music and art. Everywhere Monique went, the horse would go.
“Does Mr. Pritchitt know about the horse or do we have to sneak it in?”
Mr. Pritchitt was the school’s principal and everyone knew he was very strict. No running in the halls! No shouting in the cafeteria! What if the horse ate everything on the salad bar at lunch? Nobody could guess what Mr. Pritchitt  would say then.
“Yes, he knows,” said Mr. Dean.
“What if the horse does, you know— on the floor?” giggled Jax. Everybody laughed.
Mr. Dean rolled his eyes. “The horse is house-broken.”
“Is she going to sleep in your bed?” Taisha asked.
“No,” said Monique. “The horse will help me in the house, but she’ll have a nice barn and a fenced yard to run around in. She can’t work all the time.”
On Monday, Monique arrived at school with Daisy. Daisy was caramel color with a white star on her forehead. She was small, just like Monique said. She wore a bright blue vest that identified her as a service animal. When she had the vest on, that meant she was working to help Monique and no one was allowed to touch her or talk to her except Monique. When the vest was off, Daisy was off-duty and Monique’s classmates could pet her.
Daisy stood quietly by Monique’s desk all morning. When the class walked to the art room, Monique grasped Daisy’s harness and leaned next to her and the little horse walked in step beside her. Tempting as it was to talk to Daisy or pet her, the class understood she was working and left her alone. It was so hard though! She was small and cute, with big brown eyes and a pretty amber mane that would be so much fun to braid!
Soon it was recess and Daisy walked Monique outside. Monique sat on a long bench and unfastened Daisy’s vest. “Playtime, Daisy.”
The little horse trotted around the playground and then walked back to Monique. Everyone gathered around Daisy and pet her. “Can she have a carrot stick?” Shaun asked. “I saved one from my lunch.”
“Sure.”
Daisy crunched on the carrot while Monique’s friends braided her mane. When Monique slipped Daisy’s vest back on, it was back to work. She helped Monique stand and walked her to the classroom.
Day in day out, everyone in school saw Daisy with Monique and Daisy became part of the school’s routines. When Monique dressed as a wizard for Halloween, Daisy dressed as a dragon. Daisy stood on stage next to Monique at the spring concert. She led Monique to the ocean’s edge and stood in the water with her at the class picnic.
On the last day of school, Mr. Dean handed out report cards. He gave Monique two.  One was for Daisy! It said:
Helpfulness: A+
Cooperation: A+
Citizenship   A+
Attendance  A+
Daisy the service horse was a straight A student.

Posted by Snickertales at 7:58 AM