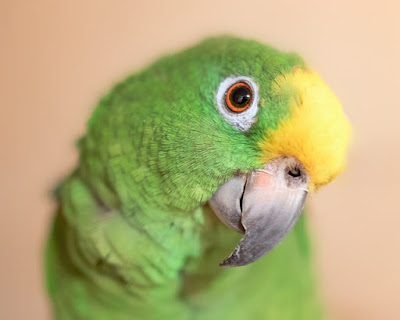 Jenna always suspected she had a superpower that would allow her to change from a human into an animal, but when she woke early one morning and found she’d turned into a parrot, she was disappointed. She’d always imagined becoming a fierce animal like a lion or a stealthy one like a wolf. If she were fated to have a superpower, turning into a parrot seemed second-rate at best.
Maybe turning into a parrot was a transition before becoming an eagle or a magnificent hawk. She closed her eyes and held her breath. When she opened them, she was still a parrot. Sleek, bright green with a large yellow beak, she flapped her wings and almost crashed into the wall as she started to fly. Steering and landing gracefully were a lot harder than she thought.
Jenna slipped out the window and spread her wings. A warm breeze lofted her higher and she found she could glide over treetops and enjoy the sights below. Flying was fun!
She tested her landing skills and gently settled on a tree branch. A little shaky, but she was getting better. She took flight again, and practiced turning right, then left.
When she settled at the top of a pine tree to rest, she caught the attention of an owl. “Whew! You sure are bright. You’re not from around here, are you?”
Jenna was amazed she understood the owl perfectly.
“Actually, I live in a house a few miles over there.” Jenna pointed with her wing. “I’m just looking around. See you soon!”
Talking to the owl felt strange. She made parrot noises that sounded harsh to her ears, but the owl seemed to understand. But, parrots also talked. She wondered if she had that ability. She tried a few words. “Jenna. Applesauce. Rainbow.” Clear as a bell.
Jenna remembered that parrots also imitated different voices. She tried to sound like her music teacher, Ms. Radnor. “Now class, sing it again from the third measure with feeling.” Perfect! Jenna realized she had the ability to imitate anyone’s voice. She wasn’t sure how that was going to come in handy, but it was fun.
Jenna circled the park and watched as people fed the ducks. Children played on the swings. People relaxed on park benches and talked.
She noticed an older man on a park bench. He looked lonely, eating a sandwich all by himself, throwing little pieces of bread to the pigeons. Jenna perched next to him. “Hello,” she said, with a wonderful British accent. “I wonder if I could join you for tea.”
The man laughed. “Where did you come from?”
Jenna didn’t answer, but started to sing a comical song. The man laughed harder. Soon, his laughter drew other people near. “Look at the parrot!”  They started talking to the man, asking if the parrot was his.
Jenna flew off and watched from the treetop. A few people talked for a while and though most wandered off, a woman stayed. She sat on the bench and was still talking to the man when Jenna realized it was time to fly home.
When she slipped back into her room, she immediately turned back into a human. She felt a bit dizzy and still didn’t know how changing from human to parrot and back again worked, but she started to have an idea that being a super-hero wasn’t always about fighting crime or being strong or fierce. Maybe her super-power had something to do with easing loneliness and making people laugh, and for that, turning into a parrot was perfect.
Like the story? Share with your friends on FACEBOOK, 'like' or comment.
Copyright 2018 by Valerie L. Egar. May not be copied or reproduced without permission from the author.
Published February 11, 2018 Journal Tribune Sunday (Biddeford, ME).

Posted by Snickertales at 4:41 AM