After All The Trees Disappeared 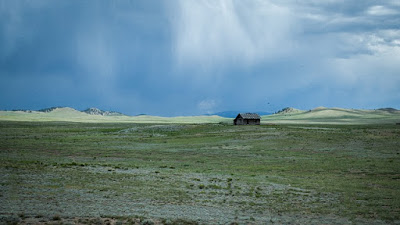 After All the Trees Disappeared
By Valerie L. Egar

After all the trees disappeared, people painted pictures of what they remembered of trees inside their houses. They painted leaves on walls and circled their wrists with green silk woven into bracelets. They bought candles called “Balsam” and “Apple Blossom” and tried to remember how trees smelled.  At bedtime, parents told stories about great forests and how birds sang from treetops. Children who had never seen a tree found it hard to imagine sunlight filtering though leafy branches.
An inventor developed Lookatree, an aluminum tree with green metallic leaves. Sunk into concrete holes in parks, they provided some shade, but were dangerous in lightening storms. Another invented Treebrella, an odd fabric creation that opened like an umbrella and was supposed to look like a tree. When people compared it to the photographs of trees in museums, they realized it didn’t resemble a tree at all.
The earth lacked beauty without trees. No bursts of color in autumn when leaves changed color. No pine branches laden with snow.  People missed the food trees provided even more. No more apples, peaches, oranges, plums, pears. No coffee.
One day, a group of girl scouts camping near a river went exploring. Digging near a cave, they uncovered a storage jar. They peeked inside, but had no idea what they were seeing. Brown, black and speckled orbs and ovals, some tiny, others the size of a thumb. “Could they be seeds?” one of the girls asked. Rumors persisted that tree seeds were cached before the tree population diminished and finally disappeared, but records were lost and no one had ever found where the seeds were stored.
The girls carried the storage jar back to the camp.  The troop leader’s eyes widened when she saw what the girls had found. “These look like seeds, all kinds of seeds!”
The University confirmed that the jar contained thousands of seeds and, in greenhouses across the world, the precious seeds were placed in fertile soil. Never had anything been watched with so much tenderness and anxiety as those pots. Video cams aimed at the pots recorded every moment and people watched on the internet, learning that trees did not sprout quickly. When the first shoot of green appeared, newspapers carried celebratory headlines.
One by one, most of the seeds sprouted and grew. Oak, apple, pine and maple.  Peach, ash, birch and locust. Gentle hands nurtured each seedling and when each was big enough, towns vied for the honor of having one. 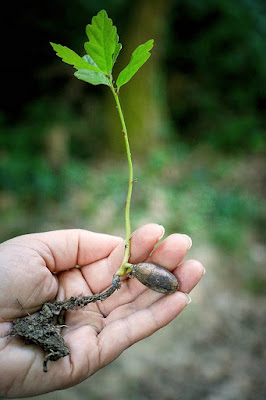 Only when the environment was suitable for the tree, was a request granted.

Towns fortunate enough to receive a sapling celebrated with great fanfare. Often, after a tree was planted, towns had a parade. People carefully watched their sapling and monitored its growth. When leaves colored and fell to the ground in the fall, people sold them as wondrous souvenirs, with the money used to care for the tree. Passers-by gently dusted snow off branches in the winter. People came from miles around to admire the tree.


When each tree was mature enough to yield seeds, they were gathered and sent to greenhouses to grow more trees. Everyone understood that it would be hundreds of years before there would be enough trees for people to enjoy a hike in a forest or picnic in a shaded grove, but they planned for the future and planted trees, one at a time.

Posted by Snickertales at 5:43 AM