Timid and scared, the brown and black dog ran through the village, rooting in garbage and drinking water from the canal. People assumed an owner too lazy to take him to a shelter dumped him in the nearby park. He ran too fast and was too wily for anyone to get a good look, but a quick glance showed he was big, about 50 pounds, a shepherd-collie mix. The twisty tail suggested a smidgen of husky or elkhound added in.
A group of young boys decided to catch him. “Here boy, c’mon.”  Offered food, the dog, shy as a deer, hesitated and decided it was too dangerous. Off he ran. For two weeks, the dog eluded people trying to help him. He grew thinner. He began to limp, most likely from being nicked by a car when he crossed the highway. The boys were persistent. One day, circling him with their bicycles, they managed to capture him. Now what to do?
My son, Leo, was a veterinary student at the University of Pennsylvania at the time.  “We’ll give him to Leo,” the boys decided. “He’ll know what to do.” Meanwhile, because of the dog’s large ears, the tips of which flopped down, and the dirt he’d collected in his fur after two weeks of running, the boys named him “Mud Flap.”
Mud Flap quickly secreted himself behind a wall of boxes in a storage room in our house and came out to eat and drink only when he was alone. Quiet and still, no one would ever think there was a large dog hiding in the room. He liked our other dogs, though, a German Shepherd, named Veronica and a husky, named Keeka. We’d pet Veronica or Keeka and say, “Good girl, what a nice dog!” and slowly, Mud Flap would emerge from his hiding place to be pet, too. Being around the other dogs helped him overcome his shyness.
Despite his large size, we soon learned Mud Flap was still a puppy. His large  half-floppy ears began to stand straight up, like a shepherd’s. He wasn’t yet house-broken. He chewed things. Everything. The handle on the hammer.  One shoe from every pair I owned. The cord off the vacuum— three times. In the day when cell phones were as large as a telephone receiver and had antennas, he fished the phone out of my purse, undid the Velcro tab on the case, extended the antenna with his teeth and chewed it off. 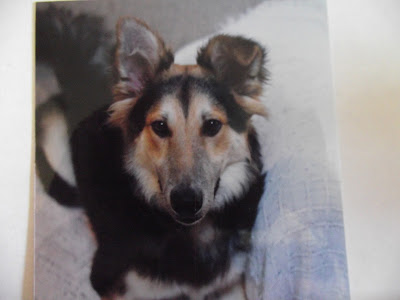 He had a knack for carrying things, which usually coincided with his desire to chew them. Liter of water? No problem, he bit onto the cap, carried it to his bed and gnawed on the bottle, piercing the plastic and spilling the water all over.  He delicately removed a frying pan left in the kitchen sink, lifting it by the handle.  His biggest find was a long steel bar with curved ends and a lock called “The Club," used to prevent auto theft. I’d grown tired of wrangling it onto the steering wheel and stashed it on a lower shelf in the utility room. He spotted it, pulled it out and carried it around, the biggest bone ever.
Though the first thought was to place Mud Flap in a good home, he soon endeared himself to the household.  We decided to rename him and keep him. “Chewy” might have worked, but I hoped he would soon limit his prodigious chewing to bones and nylon dog toys. Dennis? His good-natured mischief reminded me of the cartoon character Dennis the Menace, but somehow, the name didn’t quite fit.  He lacked menace— in his world, there was only curiosity and fun.
One morning, the lanky adolescent dog came bounding through the kitchen, the fabric remains of a recently gutted frog squeaky toy hanging from his mouth. He was moving so fast, he had no traction on the linoleum floor, and for a few brief moments, he galloped, without moving forward. We started to laugh and realized how much we’d laughed since he arrived.  The word ‘snicker’ came to mind and we tried it out. Snicker. The name was just right. 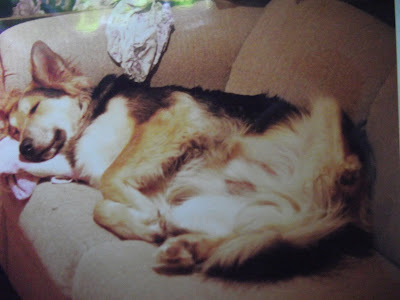 Posted by Snickertales at 5:32 AM