Mother Fox and Her Kits 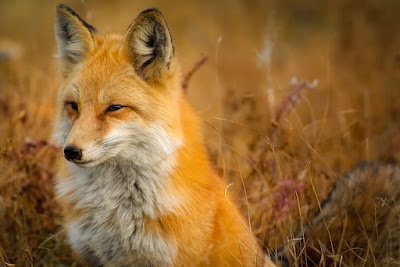 Mother Fox and her Kits
By Valerie L. Egar

Mother Fox lived in a den at the edge of a meadow with her four kits. They were handsome, with glossy red fur and white-tipped tails.  Mother Fox taught them every clever fox trick she knew: walking in a stream of water, so predators couldn’t track them and doubling back on their own tracks to confuse predators.
As the kits grew, they frolicked in the meadow, playing games. Hide and seek was a favorite. Tag was fun, too. Sometimes they played hunting games and tried to find a mole or mouse. At night, they slept cuddled next to Mother Fox in the warm den.
One day when the foxes and their mother roamed the woods, they saw two kits hiding in a briar patch.  Their fur was rumpled and they looked skinny. They hid when Mother Fox called them. 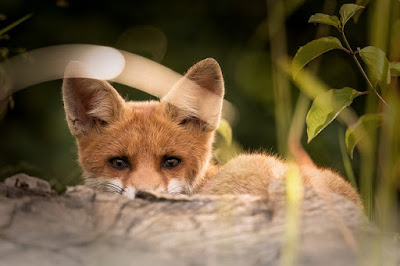 “Where’s your mother?”
The larger one poked his face out from under the briars and took one step forward.  “She went for food and didn’t come back.”
Mother Fox sighed.  She didn’t want to think what might have happened, but she knew the two kits weren’t old enough to take care of themselves. They looked  two or three weeks younger than her kits and needed food and a good cleaning up. “You’re hungry,” she said. “Come with us, I’ll feed you.”
“Mom,” growled her oldest, and she cuffed him lightly.
The new kits hadn’t eaten in days, and gobbled all the food Mother Fox gave them.  “I’m hungry,” said her second oldest. “I need more food.”
Mother Fox shook her head. “You’ve had your share.”
After dinner, Mother Fox gave each of the kits a bath, licking each kit’s fur until it was shiny. The new kits took longer because they hadn’t been cleaned in days.
“Mommy, you spent more time with them than me!” said her youngest.
“They needed more time today,” said Mother Fox.
Her youngest ran to a mud puddle and jumped in.  “Now I need more time.” Mother Fox shook her head and cleaned him off for the second time.
Getting settled to go to sleep that night took forever. None of Mother Fox’s kits wanted the new kits to sleep close to their mother. Pushing and shoving, they finally tired themselves out and fell asleep.
The next day, Mother Fox noticed that when the kits played, the older ones were rough with the two younger kits. The little ones didn’t run as fast or jump as high, and she heard the older ones laugh at them. Mother Fox scolded her children.  “Huh,” said her third kit. “You love them better than us.”
That night, Mother Fox gathered the kits around her so each one had a perfect cuddle spot. She stretched out as far as her long body would go with her tail straight out and the six kits lined up along her body with her tail and legs hugging all of them.
“Do you think we could count all the rocks in the stream?” she asked.
“What! That would take a long time,” said her oldest.
“It would,” she said.  “But, after we counted them, there wouldn’t be any more, right?”
“I suppose,” said the third kit. “But I hope that’s not what we’re doing tomorrow!”
Mother Fox laughed. “Don’t worry, we’re not. But when I love you, and you, and you, and you, and you, and you,” she said hugging each in turn, “it doesn’t mean I don’t have any love left for anyone else. Love isn’t like rocks in the stream.”
The kits thought about it. When Mother Fox divided a few sandwiches picnickers left behind, they each had a smaller portion because there were six of them, but maybe love wasn’t like that. If it were, it would soon be gone!
“With love, there’s always more to give,” said Mother Fox. “It’s not like food, or stones in the creek or even stars in the sky. There’s always more, and the more you give away, the more you have.”
“And mommies have a lot of love to give,” said her youngest.
“That’s right,” said Mother Fox. “They do.”

Like the story? Please comment and 'like' on Facebook!
Copyright 2017 by Valerie L. Egar. May not be copied or reproduced without permission from the author.
Published May 14, 2017 in Journal Tribune Sunday (Biddeford, ME).
Posted by Snickertales at 6:12 AM