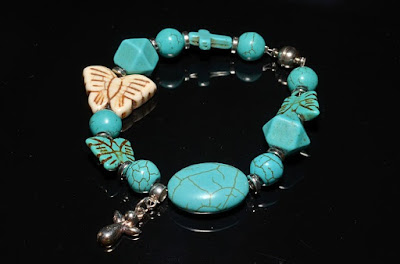 “Wow, a bracelet!” Melissa’s eyes glowed. She pulled a circle of turquoise beads from the small box and stretched it over her wrist. It fit perfectly.
Of all the birthday presents she received, she liked the bracelet from Grandma and Grandpa best.  The beads were the same color as the eggs shells she found in spring at the bottom of trees, after baby robins hatched. The same color as the ocean water in Key West when her family vacationed there. It was her favorite color and she was happy Grandma and Grandpa knew that.
The next day Melissa found a four-leaf clover on the school playground. She picked it and ran to show her teacher, Mr. Wilkins.  He showed her how to press it in a book, so she could save it.
“Aren’t four-leaf clovers lucky?”
“People think that because they’re rare,” said Mr. Wilkins.
“I think I found it because my bracelet is magic,” said Melissa.
“I think you found it because you noticed it looked different from the others,” said Mr. Wilkins.
That evening, Melissa went to the Dairy Delight with her best friend Cary. She saw a dollar bill blowing across the parking lot and picked it up. “Look what I found!”
“Oh my,” said Cary’s mother.  She looked around to see if anyone was chasing after it, but no one was.
“I found the dollar, because I have a magic bracelet,” said Melissa.
“I think you found it because it blew this way,” said Cary’s mom. “I bet you found money before and you didn’t have the bracelet.”
“That’s true,” said Melissa. “But only pennies and a few coins. Never a dollar.”
More magic happened the next day at school. Though the class was supposed to have a math test, Mr. Wilkins was absent and hadn’t left the tests for the substitute. In gym, they got to play volleyball and Melissa’s team won. Lunch was pizza. Magic was everywhere!
“But Melissa,” Dad said, “the lunch menu was printed in the newspaper last week before you had the bracelet, and pizza was what was going to be served today.”
“But the cafeteria lady could have changed her mind and served Tuna Noodle Awful,” said Melissa.
“Has that every happened?”
“No, but there’s always a first time.”
Dad sighed.
Every time Melissa mentioned her bracelet was magic, somebody pointed out there was no such thing. Dad explained that the bracelet gave her confidence, and that’s why she got an ‘A’ on her science test. When she made cookies and they came from the oven soft and delicious—as they had never before— Mom said the magic was that cooking took practice and Melissa was getting better at it. Her bracelet had nothing to do with it.
Melissa’s Grandma visited on the weekend and they took a long walk along the river.  Melissa told her all that happened during the week. “I think my bracelet is magic, but everybody says there’s no such thing.”
“What do you think?” asked Grandma.
“I think it is, but I want to know what you think.”
Grandma smiled. “The way you see the world is magic, Melissa.  Was finding the four-leaf clover a thrill?”
“Yes! The dollar too.”
Grandma laughed. “Winning  volleyball, pizza for lunch, no math test— you saw magic in that, too.”
“It was a good day!”
“Yes. But to many people, it would just be another day. How you saw it made it magic.”
Melissa thought about that.
“You put the magic in the cookies you baked and in your science test.”
“So, it’s not the bracelet?”
“A pretty bracelet always helps make magic,” Grandma said. “It’s a little like Superman’s cape.” Grandma pointed to the pretty turquoise bracelet she was wearing and winked.

Copyright 2017 by Valerie L. Egar. May not be copied or reproduced without permission from the author.
Published May 7, 2017 in Journal Tribune Sunday (Biddeford, ME).
Posted by Snickertales at 11:44 AM