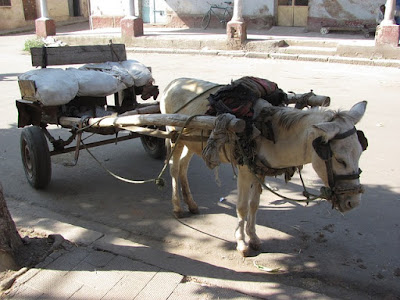 A long time ago, a stranger drove his donkey cart into a small village on market day. Bright red, decorated with painted yellow and blue flowers, the cart drew everyone’s attention. The villagers thought the stranger, a tall man with a neatly trimmed beard, looked like a scholar, though no one could say for sure, since a scholar had never visited their town.
The stranger parked his cart near the market and passers-by noticed the back of the cart was filled with coconuts. “How odd that someone so well-dressed would be selling coconuts!” the villagers thought. 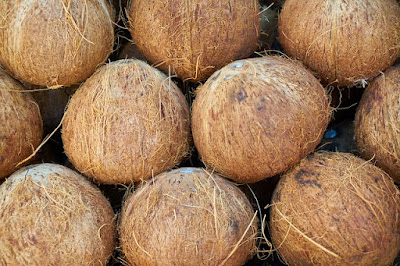 After almost everyone had seen the coconuts, the stranger took a large blue cloth from under the cart seat and began covering the coconuts, carefully tucking the cloth around them, so the villagers could no longer view what was in the cart.  Curiosity got the best of one onlooker. “I was hoping to buy a coconut to make a cake,” she said. “Aren’t you selling them?”
The stranger gasped. “Madam,” he said, “these are NOT coconuts.  They may look like coconuts. If you broke one open it might taste like a coconut. But, I repeat, they are NOT coconuts.” He said it in such a way, the woman was embarrassed by her ignorance and didn’t want to ask what they really were.
The man lowered his voice and whispered, “These are magic wishing eggs. Handled properly, they hatch whatever a person desires. I’m taking them across the river to sell.”
The woman’s eyes widened. Magic wishing eggs! What could be better than that? “Sell them here!” she demanded.
The man shook his head. “I can’t. I promised  them to—” He pointed toward the river.
“Dundershine? “
“Yes, that’s it,” he replied. “The mayor of Dundershine promised me the villagers would pay the highest price for my magic wishing eggs.”
“Well,” the woman huffed. “As far as I know you never asked us!” She set out to complain to anyone who would listen. Soon, word spread that their small village had been overlooked and that magic wishing eggs were headed to Dundershine.
A group of townspeople approached the stranger, who was sitting in his cart, reading a book.
“I’m a lawyer,” a squat man announced. “I’ve brought some of our finest citizens with me. “We would like the opportunity to purchase the magic eggs.”
The stranger shook his head. “I am sorry they weren’t covered when I drove into town. I promised them to Dundershine, every single one. Perhaps next year, if I can find some more—”
“We want them now!” a man yelled.
“We’ll pay double,” said another.
“I’m not the kind to break a promise,” said the man.
“We’ll pay triple,” said the lawyer, “and you won’t have to cross the river or deal with those foolish people in Dundershine. They aren’t very smart, you know.”
The man sighed. “All of you are so kind. I wish I’d met you before I promised Dundershine the magic wishing eggs. Whatever you desire would be at your fingertips. See my beautiful cart? I have it because of the wishing eggs. My fat donkey, my tailored clothes? All from the magic wishing eggs. I have a beautiful wife, a fine house. I owe everything I have to the wonder of the magic eggs. But, I am a man of my word and I cannot I break my promise to Dundershine.”
“We’ll pay ten times more than Dundershine!”
A small tear rolled down the man’s cheek. “Good people,” he cried. “You are making it so hard. I would not, would never go back on my word, but I could help my dear sister with so much money. She is widowed and alone with seven small children—”
The crowd began to clap.
“So, I must say yes, yes, you may buy the magic wishing eggs.”
The stranger unloaded the cart and took the money— a great sum for ordinary coconuts— and hightailed it out of town.
Like the story? Share it with your FACEBOOK friends, 'like' and share.
Copyright 2018 by Valerie L. Egar. May not be copied, reproduced or distributed without permission from the author,
Published June 3, 2018 Biddeford Journal Tribune (Biddeford, ME)

Posted by Snickertales at 5:50 PM