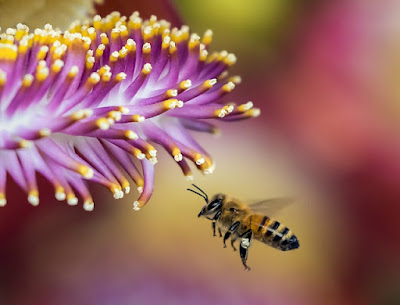 Rafaella’s tiny house was at the end of a dirt road. A hand-painted sign that said “Honey 4 Sale” with a crooked arrow pointed the way to her cottage.
Rafaella had everything she needed to be happy— a good supply of firewood to keep her warm in winter. A soft bed with a colorful quilt. Clean water and a kettle to make tea, flour to make biscuits. Books to read, a journal to write in. A red tabby cat that purred her to sleep every night. Best of all, she had five hives of honey bees that made enough honey for her to sweeten her tea and to sell when people found their way to her door.
Rafaella’s hives sat at the edge of an ancient apple orchard that blossomed every spring and the bees happily gathered nectar there. Wild roses growing in Rafaella’s garden added spice to the bee’s honey. Best of all, the songs Rafaella sang to the bees as she tended the hives added magic so that people eating the honey received whatever they needed most. Rafaella never knew what that might be, but she learned from experience that people seldom received what they thought they needed.
A businessman who was impatient to get his projects moving gulped the honey as though it was a glass of water, thinking he needed employees who worked harder and faster. Instead, he was gifted with laughter and a sense of fun. His projects still got done and he was happier.
A pilgrim who asked for a clear path received a map with squiggles all over it.  “I asked for a clear path,” she complained.
“Your path is exploration and adventure,” said Rafaella. “It goes everywhere.”
A man carrying a sack of heavy rocks took a spoonful of Rafaella’s  magic honey, wishing for a wagon to ease his burden. Instead, the rocks disappeared.
“You needed your burden removed,” said Rafaella, “not a wagon to carry it around with you.”
The man had never thought about it that way.  Being without the sack of rocks felt a little strange at first. After a while, he agreed he was happier rid of them.
Curious people from all over started to show up at Rafaella’s door, hearing tales about magic honey that would give them what they needed. Not everyone was happy when they left. Even though Rafaella wrote on the labels, “What you need might not be what you want,” most people thought that didn’t apply to them and were angry when the unimaginable happened.
A circus lion tamer turned into a lion and learned what it felt like to be in a cage and jump through rings of fire to make people clap.
A bully turned into gum on the bottom of a shoe.
A famous actor became just another face in the crowd and learned humility.
Business for Rafaella’s honey soon fell off. Though she continued to sweeten her tea with it, and generously spread it on warm biscuits, only the bravest were inclined to taste honey that would magically provide what they needed most.
Would you taste it?

Copyright 2018 by Valerie L. Egar. May not be published, distributed or reproduced without permission from the author.