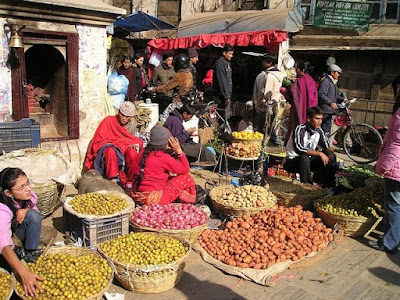 Once upon a time, a very long time ago, a young farmer, Prem, lived at the edge of a small village. He was a cheerful man, and well liked by the townspeople.
Prem loved the earth and all its creatures. He talked to seeds as he planted them and sang to the earth as he walked on it. When he planted grain, he always planted a share for the birds. He was grateful for the sun and the rain and particularly thankful for a little patch of earth on a hillside that was perfect for growing melons.
“Oh, what a beautiful vine you will grow to be,” he said as he planted each seed. “The fruit growing on your vine will be sweet and plentiful. I am so happy to help you grow.”
As the vines grew, Prem tended them with great care.  He loosened the hard soil around them and fertilized them.  When weeks went by without rain, he hauled barrels of water from the river with his horse cart and watered each plant. Not one weed slipped past his sharp eye.
When the vines flowered and the melons began to form, he talked to each one.  “How sweet you will be!” he murmured.  “Oh, what a beauty you are!”
As the melons ripened in the summer sun, Prem took them to the village market and sold them. They were fragrant and promised to be delicious. He quickly sold them all. 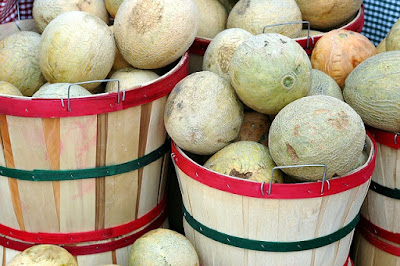 Those who were fortunate enough to have bought one of Prem’s melons could speak of nothing else that week. They could not describe the marvelous taste with simple words, only with comparisons. “Rainbow-flavored,” one person said.  “Spiced with the light of the morning star,” said another.
The following week, Prem found a line of people waiting for him when he arrived with his wagon of melons. Once again, he quickly sold them all.
Word of his incredible melons continued to spread. Soon, the King heard about them. He was a greedy man and decided if the melons were so delicious, he would have all of them for himself. He sent a letter to Prem telling him he would buy every melon Prem had.
Most farmers would be happy to sell their whole crop so easily, but Prem wasn’t that kind of man. He thought of the children who would delight at a sweet bite of melon and the old women who said even a small taste made them remember long ago summers. He thought of the families carrying one of his ripe melons on a picnic and anticipating its flavor as it was sliced. If the King bought them all, no one else would have any. He didn’t want to sell all of the melons to the King.
That night, by the light of the moon, Prem worked until each melon bore the name of a person in the town, his knife delicately piercing the skin to write the name, but not so much to cut into the sweet flesh. On and on he wrote, until dawn came. The skin would scar as the melons continued to ripen, leaving the name.
In the morning, Prem was tired, but not so tired that he didn’t go to town and spread the word about what he had done. Each of the townspeople happily paid Prem for the melon ripening in his field with his or her name. Then, Prem wrote to the King. “Dearest King,” he said. “I am afraid I do not own any melons to sell you. Each of the people on the attached list owns one melon. Perhaps you will find someone willing to sell you theirs.”
The King immediately sent a messenger with a bag of gold to buy whatever melons he could. A few people sold theirs to the King, which was to be expected, but when their neighbors talked about the flavor of the melons from that extraordinary crop for so many years and so often it became legend, they wondered if they hadn’t missed something very special.
Like the story? Share with your FACEBOOK friends, 'like' and comment.
Copyright 2017 by Valerie L. Egar. May not be copied, reproduced or distributed without permission from the author.
Published Biddeford Journal Tribune (Biddeford, ME) May 21, 2017.

Posted by Snickertales at 12:34 PM