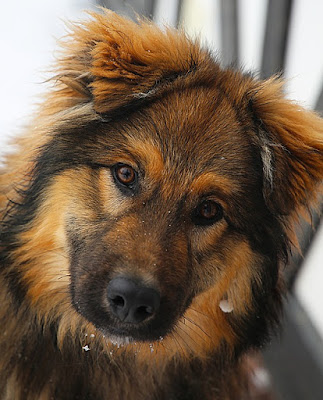 Layla lingered at the cage, gazing at the oversized puppy with black and golden fur who looked at her eagerly. One ear stood straight up and the other flopped down. He held his tail high in the air and it curled over his body like a question mark. “Are you sure he’s a puppy?” At five months old, the young dog weighed fifty pounds and stood tall as her school desk.
“Look how big his paws are. He hasn’t grown into them yet,” Dad said.
“What kind of dog is he?” Layla asked.
The shelter’s adoption counselor smiled. “I’d guess a little collie, mixed with some golden retriever and maybe a hint of German Shepherd.”
“Sit,” Layla said. The dog sat. “Good boy, Huxley,” said Layla.
“Huxley?”
Layla nodded. “I saw the name in a book I read.”
Huxley went home with his new family, but not before they stopped at the pet food store to buy puppy chow and a nice squeaky stuffed frog for Huxley to play with.
Huxley liked his new toy, but he was curious and had to find out how it made noise. He held it down with one paw and tore at it with his teeth. Soon the stuffing and the plastic squeaker were on the floor. He carried the unstuffed frog to Layla. “Oh, Huxley!” she sighed.
Huxley liked discovering new things to chew. Mom brought in bags of groceries. Huxley stuck his head in every bag when Mom wasn’t looking. He found a box of tea bags, carried it to his dog bed and chewed it open. Tea smelled nice, but Huxley didn’t want to eat it.
Dad hung pictures in his office and left the hammer on the floor. Huxley thought it looked a little like a bone. He carried it to his dog bed and chewed on the handle. Yuck! It didn’t have much flavor. Dad found the hammer decorated with tooth marks.
A bottle of water looked very interesting and it was easy to carry when Huxley grasped it by the top with his teeth. He carried it to his dog bed and gnawed on it. Eww! It made his bed wet.
The vacuum made too much noise. Huxley fixed it by chewing the electric cord off.
Magazines had wonderful scented paper perfume samples inside. Huxley loved how they smelled. Too bad he had to tear up the whole magazine just to get to them out.
Huxley found a feedbag of nuts and dried fruit his family bought to feed the woodpeckers. Huxley put his head deep into the bag and gobbled the woodpecker food. It was delicious. “Are you a woodpecker?” his family asked. “That’s not for you, Huxley.”
When his family forgot to shut the closet door, Huxley explored inside and found piles of shoes. They had funny looking spiky sticks on one end and looked hard to walk on. They were made from leather though and rather tasty. He chewed a red one, a blue one and another that was an odd shade of brown.
“Good thing I don’t wear high heels anymore,” Mom said. “You’re helping me clear the closet, Huxley.”
Layla found him with a canister of oatmeal, the lid chewed off and oatmeal sprinkled all over. “Oh, Huxley,” Layla said. “When are you going to grow up?”
Huxley’s family went to the store and bought lots of chew toys for him—fancy ones shaped like bones and rubber ones they stuffed with treats. Maybe, just maybe, he would chew on his toys instead of things he wasn’t supposed to chew, like table legs and TV remotes. Huxley enjoyed his new toys, but he was still a puppy and now and then, he still decided to taste something new.
“Oh, Huxley! Not my science homework!”