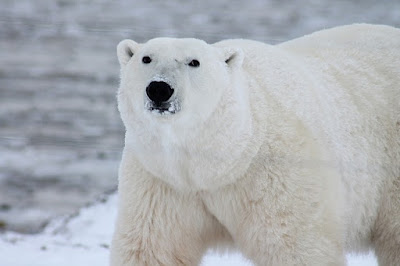 If I Had A Polar Bear
by Valerie L. Egar

If I had a polar bear, I’d name him Blueberry, because after polar bears, blueberries are what I like best.
On Saturdays, Blueberry and I would stroll down Main Street and window shop. I’d point out the red bike in Mitch’s Bicycle Shop and he’d look at the smoked salmon in Gourmet World. Everyone would take pictures of us and post them on Facebook.
After our walk, we’d stop for ice cream at Dairy Delight. I’d order vanilla for both of us and ask the server to please put his in a dish. I don’t think a polar bear can hold a cone, but I’d give him a taste of mine.
If I had a polar bear, I’d bring him to school. I’d tell him to be very quiet when the teacher talked. At lunchtime, he’d know to wait in line without pushing, even when pizza was being served.
All the bullies would stay far away from us. If they wanted to make friends with him, I’d say, “Maybe. Blueberry has to think about it, he’s very particular.”
If I had a polar bear, I’d ask Coach Simmons if he could be on the soccer team.  A polar bear would be a great goalie and maybe our team would win for a change. I wonder if team shirts come in extra-extra-extra large?
If I had a polar bear, I would tell him my secrets and he would keep them, not like my big-mouth friend Jenna who told everybody in school about my pants ripping in the back when I bent down to pick up my pencil.
If I had a polar bear, we’d take a trip to the Arctic every year to visit his family. We’d dog-sled across the tundra with presents of herring and salmon lashed onto the sled. I’d remember to bring a good supply of peanut butter and jelly so I wouldn’t be hungry. I think fish is icky.
If I had a polar bear, we’d swim in the lake every day in the summer. If he used my inner tube, he’d pop it with his sharp claws, so I’d ask Dad to get him something nice he could use as a float, maybe a big log. Better yet, maybe Dad would let him float on top of the canoe.
If I had a polar bear, we’d go to the fair together. I’d buy him a funnel cake. If he liked cotton candy, I’d buy him that, too. I don’t think he’d like to ride on a Ferris wheel, but he might like to try the Merry-go-Round. If he did, I’d stay next to him, so he wouldn’t be scared.
If I had a polar bear, my friends and I would play hide and seek with him in the winter.  With all the snow, he would be hard to find and that would make us laugh.
If I had a polar bear, we would talk to the President and the United Nations about preserving the places polar bears live. Blueberry would convince them to do what’s right with his polar bear smile and big paws.
If I had a polar bear, he would hug me at night and I would fall asleep nestled in his sweet warm fur.
I wish I had a polar bear!

Copyright 2015 by Valerie L. Egar. May not be reproduced, copied or distributed without permission from the author.

Posted by Snickertales at 6:36 AM