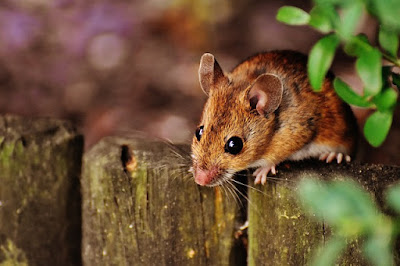 Jarrod, a small grey mouse with a white star on his tiny chest, was still growing and he was always hungry. He nibbled on cookie crumbs he found in the park. He crunched on birdseed that fell from feeders. He tasted tree bark (yuk!) and ripe berries (yum!). For Jarrod, the world was a huge buffet— every day brought new foods to savor.
One day, Jarrod discovered a handful of seeds near an abandoned farmhouse.  Never had he seen such seeds! They were speckled and blue. He tasted one. “Mmmm. Similar to a peanut, with an undertone of nutmeg and a hint of citrus.” He ate another.  They were delicious. He eyed the pile. Too many to carry back to his house. Even if he made several trips, some other mouse or a squirrel might discover them and eat them before he could take them away and stash them.
Jarrod decided to sleep on top of the seeds. Not one creature could touch the seeds without him waking. In the morning, a delicious breakfast would be right in front of him. With a yawn, Jarrod stretched and fell asleep.
When Jarrod woke up, a cool breeze chilled his back. Everything around him moved with the breeze. He grasped the vine next to him and held on. “Hmm, that wasn’t there before.” He looked around. Sunlight filtered through large green leaves surrounding him. He glanced behind him, but the farmhouse was gone. So were all the trees. “Where am I?”
Jarrod peeked out from under one of the leaves. “Oh, no!”  He was on a vine so high in the air he saw treetops. He remembered his mother’s story about Jack and his magic beanstalk. “Magic beans,” Jarrod thought. “No wondered they tasted good!”
He took another peek from under the leaf and shivered. The few people he saw looked as small as mice. The ground was miles away. He clung to the vine with all his might. The height made him dizzy. When a small gust of wind shook the vine, he screamed. “Eeeek!” He was afraid to move, but knew he needed to get down.
A hawk flew by. “Hello, mouse,” he grinned. “Come a little closer and I will carry you away.”
Jarrod’s mother had taught him about hawks. “No, thanks!” he shouted and the hawk flew off.
A few milkweed seeds with their silky parachutes drifted by.  “Grab us and hold on, we’ll get you back down,” they said.
Jarrod shook his head. It was a kind offer, but they didn’t look strong enough and he imagined plunging to earth. Jarrod shivered. “Thank you so much, but no.”
As long as he didn’t look down, he was calm. Jarrod realized he felt hungry. He nibbled on a leaf. It tasted like cherries.  He tried another.  Cheese. “How could that be?” Jarrod thought, but he didn’t think about it for very long.  Instead, he ate it.  Jarrod bit the vine.  Some parts tasted like caramel and others like cinnamon. Another part like fresh strawberries.
Every now and then, Jarrod wondered how he would find his way back to earth, but then he tasted another leaf and wondered how many flavors there could possibly be.  Pineapple. Carrot. Coconut. Grape. Almond. Jarrod munched and munched. Every leaf tasted different. He decided the only flavors he didn’t like were rutabaga and mushroom. He left most of those leaves uneaten. The vine also changed flavor as he ate. Bubble gum, black raspberry, pizza.
Jarrod ate and ate until he was full. He peeked out from behind the few remaining leaves and blinked. He was inches from the ground! “Oh my,” he thought.  “Safe at last! I’ve eaten the entire vine.”
He was tired from eating so much and fell asleep once again on the magic seeds. If another vine sprouted during the night, Jarrod knew exactly what to do.
Like the story? Share with your FACEBOOK friends, 'like' and comment.
Copyright 2018 by Valerie L. Egar. May not be copied, reproduced or distributed without permission from the author.
Published September 23, 2018 Biddeford Journal Tribune (Biddeford, ME).

Posted by Snickertales at 6:33 AM