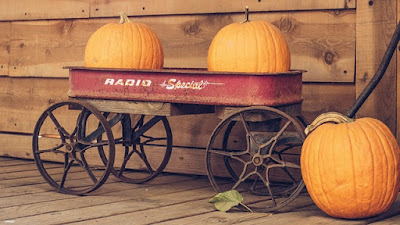 When Maizie walked downstairs on Saturday morning, she found Grandpa at the breakfast table having coffee with Mom. “Morning, Maizie.” Grandpa’s eyes sparkled. “I’ve got a Halloween pumpkin for you, maybe even more than one.”
Maizie’s didn’t see a pumpkin. It wasn’t even close to Halloween. Grandpa was joking. “No, you don’t.”
“Oh, yes I do.” He pulled a paper packet from his shirt pocket. A picture of an orange jack o’ lantern decorated the front. “It’s right in here.” He gave the packet to Maizie. She shook it.
“Pumpkin seeds,” Grandpa said. “I’m guessing you can grow a few pumpkins by Halloween. Want to try?”
“Yes!”
After breakfast, Maizie and Grandpa went outside. Grandpa had turned soil over on a small hill at the back of the house, away from her Mom’s garden.
“Let’s get some compost to enrich the soil.” Maizie and Grandpa took the wheelbarrow and Grandpa shoveled some compost into it. Maizie helped spread it on the overturned soil.
Grandpa opened the seed packet.  “Take a look at the seeds, Maizie.” 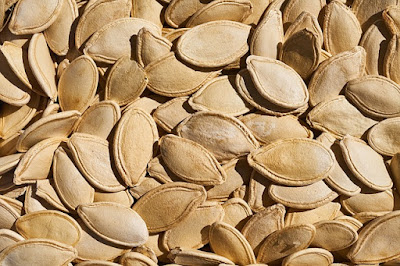 She saw flat white almond shaped seeds that were easy to hold.
“Every seed is a promise,” Grandpa said.  “These seeds, given the right conditions, can grow pumpkins and produce seeds for more pumpkins next year. That’s what the seed, any seed, promises us. But we have to keep our end of the bargain and make a promise to the seed.”
Maizie raised her eyebrows. “Like what?”
“To plant it in fertile earth, which is why we added the compost. To make sure it gets watered regularly. That it gets sunshine. Notice there are no trees near your little patch? Pumpkins like sun. To tend the plants as they grow and watch over them. Can you do that?”
Maizie nodded.
Grandpa showed her how to plant the seeds and she pushed them into the earth, not too deep. Then she watered them, using her watering can.
Every day she looked to see if the seeds had sprouted.  She worried when she didn’t see anything. Maybe a squirrel dug the seeds up and ate them? Maybe they sprouted at night and a rabbit munched on them? Finally, after ten days, she saw a few leaves popping up.
Once the pumpkin vines began to grow, they spread quickly and Maizie took care to water them generously. Grandpa showed her how to cull the weaker plants and how to trim the vines to keep them strong. When the first flowers appeared in late June, Maizie did a happy dance. “Some of those flowers will grow into pumpkins,” Grandpa explained.
“All of them! I’ll have hundreds of pumpkins!”
“No, only some flowers will grow pumpkins. And, if you want a big pumpkin, we’ll need to cut off some of the flowers so all the plant’s energy goes into a few pumpkins.”
The pumpkins grew bigger and turned yellow, then bright orange. By the end of September, Maizie had five large 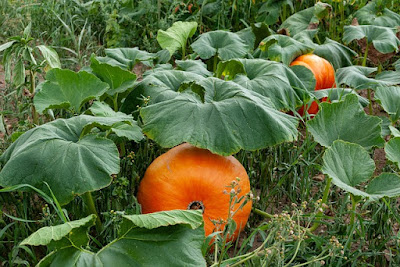 pumpkins. She gave one to Grandpa for his front porch and another to her best friend, Joellen. She kept the other three for Halloween, but when it came time to cut them into jack o’ lanterns, she couldn’t do it.  They’d taken a lot of time to grow and she wanted them to last longer than a few days.
Maizie painted faces on the pumpkins and they remained on the front steps until the first snowfall.  When she and Joellen made three snow people, Maizie used the pumpkins as their heads. They looked silly and Maizie enjoyed looking at them until the snow melted.

Posted by Snickertales at 8:58 PM