Pine Tree by The River 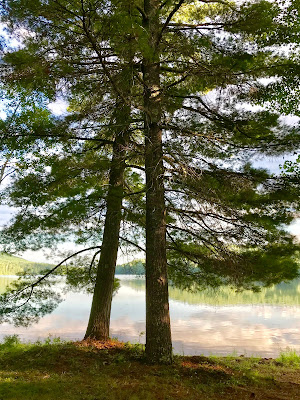 Pine Tree by the River
By Valerie L. Egar

Mitch and his grandfather walked a worn path to the river, fishing poles in hand. A tall pine grew at the edge of the riverbank, towering over them, its girth too big to encircle with arms. “It’s so big it would take three people, maybe four to put their arms around it!” Mitch said.
His grandfather nodded. “It was here when I was a boy, with another like it over there.” The old man pointed to a bare spot near the water’s edge.
“What happened?”
“Nor’easter. Wind uprooted it.”
Sunlight filtered though the tree’s dark green needles, dappling the ground. The boy patted the tree’s bark. “How old is the tree?”
His grandfather considered. “It was big when I was a boy, but I don’t know how old it is. I’m sure there’s a way to figure it out, though. I’ll ask my friend Dan. He’ll know, he’s a forester.”  Grandpa lifted his fishing pole. “Now let’s get down to some fishing!”
Later that week, Grandpa asked Mitch if he wanted to walk to the river. “To fish?”
Grandpa held tape measure, a small pad and a calculator. “Not today. Let’s figure out how old the tree is.”
When they arrived at the riverbank, Grandpa extended the measuring tape and asked Mitch to walk it around the tree. Mitch marched around the tree and handed his end to Grandpa. Grandpa held the tape chest high— a little bit taller than Mitch— and called out a number. “One hundred twenty-eight inches.”
“Should I write that down?” Mitch asked.
“Good idea.”
They sat on the riverbank and Grandpa took out the calculator. “We’ll never know exactly how old the tree is, but when we’re finished, we’ll have a good estimation of its age, OK?”
Mitch nodded.
“The first thing is to figure out what the diameter of the tree is. Do you know what that is?”
“No.”
“It’s the measurement across the middle of a circle. If I cut the tree down and measured across the trunk, that would be the diameter. But, we don’t want to cut the tree down.”
“Right.”
“So, I measured around the tree. We can figure out the diameter from that.” Grandpa handed Mitch the calculator. “The measurement around the tree was—”
Mitch looked at what he’d written, “One hundred twenty-eight.” He slowly tapped “128” into the calculator.
“To find the diameter, divide by 3.14.”
Mitch raised his eyebrows when he saw  40.764331 appear on the screen.  “The tree is only 40? You’re older than that!”
Grandpa laughed. “We aren’t finished yet. Different trees grow at different rates. Some grow fast, some slow. Do you know what kind of tree that is?”
“Pine.”
“Yes, white pine. According to Dan, they have a growth rate of five. Multiply the number on your calculator by five. If it were a different kind of tree, we’d use a different number.”
Mitch’s eyes widened. “203.82165?”
“Let’s just say two hundred four, OK? Now subtract two hundred four from 2018 and you have some idea when the tree sprouted.”
“1814.”
Grandpa nodded.
“Just imagine. Your ancestors had just settled in these parts, built the farmhouse, cleared the land. Big trees had been cut and floated down the river, to build ships and houses. This little seedling sprang up, a bristle of dark green at the top.
“Wild game was plentiful. Moose and bear walked by the little tree, maybe even a cougar coming to the river to drink.
“It grew bigger. Our country was young, only thirty-eight years old. There were probably bigger trees around the sapling and many of them were cut for lumber, but the tree was small and near the water. People left it alone.
“Bridges were built across the river, but not here. This tree was left to grow.
“Every single one of your ancestors who lived here passed by the tree, played under it, fished by it. They picked up pinecones for kindling, picnicked by it. If the tree could talk, it could tell you stories about all of them.”


Mitch patted the tree. That was something to think about.
Like the story? Share with your FACEBOOK friends, 'like' and comment.
Copyright 2018 by Valerie L. Egar. May not be published, reproduced or distributed without permission from the author.
Published August 26, 2018 Biddeford Journal Tribune (Biddeford, ME)
Posted by Snickertales at 7:55 AM