The Best Chocolate Cake in the World 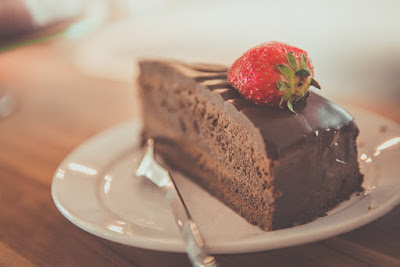 The Best Chocolate Cake in the World
By Valerie L. Egar

From the time she was 9 or 10, Serena was on a mission to find the perfect chocolate cake. She admired her mother’s, of course. Bold, with just the tiniest surprise of cinnamon, her mother’s cake tasted delicious, but Serena doubted it was the best in the world. She decided that she would eventually find the best by tasting chocolate cake whenever she had the opportunity.
In the beginning, Serena sampled chocolate cake at birthday parties and weddings. Some were average, a few below par. None were close to best. If asked, Serena wouldn’t have been able to say what she was looking for, exactly.  “I’ll know it’s the best one when I find it,” was all she could say. She believed a perfect chocolate cake existed, the way an explorer had faith distant lands waited to be discovered.
As she grew, Serena began baking, experimenting with various recipes. Perhaps she would create the perfect chocolate cake herself. More sugar, less sugar, a touch of honey, a dab of molasses.  She tried different spices and flavors to enhance the chocolate— coffee, the finest vanilla, even a touch of cayenne pepper. She considered the merits of milk chocolate and dark. Though she received many compliments and even won prizes, she remained dissatisfied. Her cakes were very good, but she was convinced a better chocolate cake existed somewhere other than her kitchen.
Serena became a journalist and traveled widely. No matter where she ate, she invariably ordered chocolate cake for desert.  A divine slice of moist cake with rich chocolate icing, filled with chocolate mousse thrilled her in Paris. A fancy chocolate meringue cake filled with chocolate whipped cream and chocolate sponge wowed her in Mexico City. Still, they fell short of what she imagined.
One day Serena wandered into a small café on a side street in a small village in Finland. The last thing on her mind was chocolate cake, but there it was on the menu, in large red letters. She ordered a slice, but didn’t expect much because she was tired and her feet hurt from walking.
When the cake arrived, it looked beautiful— two moist layers with small fresh strawberries in between, iced with creamy chocolate frosting.  She took a small bite. The strawberries tasted like sunshine and flowers, perfectly ripe, sweet as honey. The cake wasn’t overly sweet and provided contrast for the sweet berries. Serena slowly ate the cake and decided it was perfect. As the flavor of chocolate and strawberries lingered on her tongue, Serena knew she would never eat chocolate cake again, ever.  She had found the perfect one, and there would be no comparison.
Shortly after, Serena wrote an article for a magazine about her quest and mentioned the small Finnish restaurant. People flocked there. “No chocolate strawberry cake,” the owner said. “The growing season for strawberries is very short.” When strawberries were in season again, they weren’t as sweet as the ones Serena ate. “I cannot tell strawberries how to taste,” the restaurant owner said. “That depends on the sun, the rain and the strawberries.”
People wrote angry letters to Serena, disputing that the cake she tasted was best. “Try mine,” a few offered. “You’ll see you were wrong.” Or, a letter might begin, “When I was in Argentina, I discovered the best—” or, “Obviously, you have never travelled to British Columbia.”
Serena sighed and answered every letter. “I was writing about my quest to find something I believed existed,” she wrote.  “I wasn’t writing a restaurant review.
“Your quest will be different from mine. Maybe it’s climbing the highest mountain or experiencing the loveliest sunrise. If it’s finding the best chocolate cake, the one you like best probably isn’t in Finland. I can’t tell you where yours exists, because I don’t know.
“You’ll have to find it for yourself, ” she added. “And that’s OK.”
Like the story? Share with your FACEBOOK friends, comment and like.
Copyright 2018 by Valerie L. Egar. May not be copied, reproduced or distributed without permission from the author.
Published July 29, 2018 Biddeford Journal Tribune (Biddeford, ME).

Posted by Snickertales at 4:52 PM