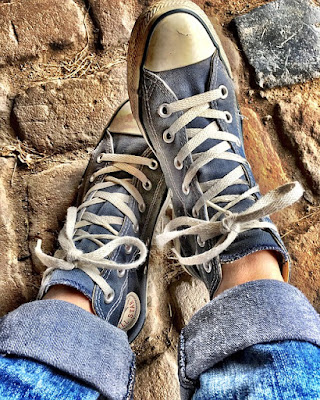 Kayla wasn’t sure who decided blue FLYR sneakers were cool and other brands and colors weren’t. They didn’t make anybody run faster or jump higher— Kate still ran the fastest and Jerry still lagged behind everybody. Nobody got magically smarter when they laced their FLYRs on. Still, Kayla wanted a pair of blue FLYRs more than anything.
With a pair of blue FLYRs on her feet, Peyton wouldn’t wrinkle her nose and say, “I’d just die if I had to wear sneakers with stripes!”
Mia wouldn’t toss her head and ask, “Where’d you find those?” At the very least, the teasing would stop if she had a pair of FLYRs and maybe, just maybe, Peyton, Mia and the other girls would think she was cool, too.
“My sneakers are too tight,” Kayla told her mother.
“Already?” Mom sighed. She felt where Kayla’s toes were. “Your toes still have room.”
“But they hurt!” Kayla said. “I need new ones.  Blue FLYRs.”
Mom shook her head. “Too expensive, Kayla. They don’t fit with our budget. It’s not time for new sneakers, but when it is, FLYRs are out.”
Kayla asked for blue FLYRs for Christmas. No luck.
She asked again for her birthday. She received lots of nice presents, but not blue FLYRs.
Kayla decided to save money to buy her own. She stashed her allowance and did a few odd jobs for neighbors. Her grandmother gave her $10 for helping clean and organize the pantry. At the end of the month, Kayla had $25. It was going to take a long time to save enough for a pair of FLYRs, too long. Kayla felt discouraged.
On Saturday morning, Kayla was in the thrift store with her mother and little sister. Right there on the rack in front of her, blue FLYRs! She grabbed them and tried them on. “Mom, look!”
“Honey, they’re about five sizes too big.”
“I’ll stuff the fronts with newspaper so they fit.”
“That wouldn’t be good for your feet.”
“I’m growing really fast. They’ll probably fit next week.”
“I don’t think so.”
The next day, Kayla asked her mother to take her to the mall. She looked and looked and finally found a pair of white high-tops that fit on sale. She bought them with the money she’d saved.
“What are you doing with those?” Mom asked.
“You’ll see,” said Kayla.
When she got home, Kayla got out her paints and started to draw on her new sneakers. She painted a dragon on one sneaker 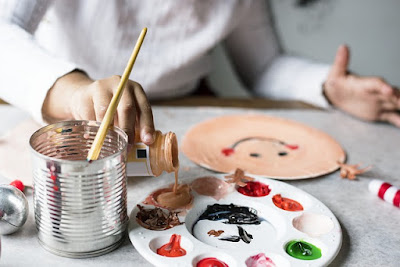 and an anime-style picture of herself petting an elephant on the other.  Then she borrowed her mother’s glue gun and glued a few blue sequins on the dragon to suggest scales and a few red sequins on the elephant just for fun.
She put the sneakers on and looked down at her feet. The dragon glittered fiercely on her right foot, exactly as a dragon should. Her self-portrait with the elephant made her smile, because she loved elephants so much. Her new sneakers made her very happy.
When she went to school the next day, Peyton stared at Kayla’s new sneakers. “They don’t match,” she said.
“They aren’t supposed to,” said Kayla. “They’re art.”
“I think they’re cool,” said Mia. “I wish I had a pair like that.”
“There’s only one pair like this in the whole world,” said Kayla. “But I’ll help you make a pair for yourself if you’d like,” she said. “What’s your favorite animal?”
Like the story? Share with your FACEBOOK friends and 'like' or comment.
Copyright 2018 by Valerie L. Egar. May not be copied or reproduced without permission from the author.
Published January 14, 2018 Journal Tribune Sunday (Biddeford, ME).

Posted by Snickertales at 5:58 AM