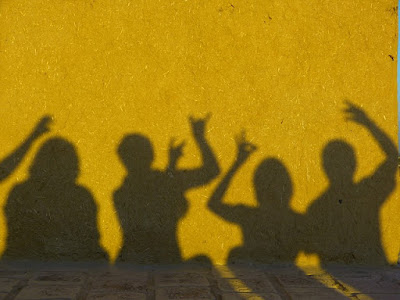 Some shadows walk politely in front of the person they belong to, and others obediently follow behind, but everyone knows a shadow is not supposed to run off by itself. A good shadow jumps when its person jumps, dances when its person dances and sleeps when its person sleeps.
Eli’s shadow refused to do what shadows do. If he climbed a tree, his shadow stayed at the bottom and took a nap.
When Eli walked to school, his shadow wandered into the woods to play with leaf shadows and left Eli to struggle through his arithmetic all by himself.
Eli’s mother asked him to run to the neighbor’s house to borrow a cup of sugar. His shadow stayed home and watched TV.
Worst of all, when Eli slept, his shadow slipped away and caused all kinds of mischief.
Who opened the gate and let out Farmer Tyson’s cows?  Eli’s naughty shadow.
The shadow picked all of Mrs. Thorne’s lilacs, woke sleeping babies and made dogs howl. The worst part of all is that Eli got blamed!
“I hate him!” Eli said.  “All he does is get me in trouble!”
Eli didn’t know what to do. His mother tried gluing his shadow to the bottom of his feet, but when he put on his socks and shoes, the shadow scrunched close to his body and neither of them could move.
His mother glued the shadow to the bottom of his shoes. That didn’t work either.  When Eli took his shoes off, the shadow ran away, dragging the shoes behind him.
One day, Eli’s teacher sent a note home from school. “I’m afraid Eli’s shadow wandered into the boy’s room when we were having a spelling test,” the note said. “I found water all over the floor and toilet paper wrapped around the sink.”
“Enough!” said Eli’s Dad.  He bought a plane ticket and sent the shadow to live in a jungle far, far away.
The shadow liked the jungle. He hung from the trees with monkeys and slept in the shade of a banana tree. He bowled with coconuts. But, after a while, he missed Eli. They’d been born together, after all.
For a short time, Eli was happy to be without his troublesome shadow, but he grew pale. He couldn’t eat. He wasn’t interested in playing. Part of him was missing.
“Oh my,” the doctor said when he saw Eli. “Where’s your shadow? Did you have a shadowectomy?”
“I sent it away,” said his father. “It was always wandering off, causing trouble.”
“I hated him,” Eli said. “He was bad.”
“He kept wandering off because you didn’t like him,” said the Doctor.“You never got to know him and make him your friend.”
The Doctor sang a beautiful song that woke the shadow and called him back to Eli. Faster than the speed of light the shadow returned, lured by the doctor’s song.
Eli didn’t realize he’d be happy to have his shadow back, but he was. The shadow was equally happy to see him. Eli got to know him better and after that, they stuck together.
When Eli hiked to the top of a mountain, his shadow hiked with him. They admired the view, the colors richer and more beautiful because they were together. Everything was better for Eli now that they were friends and they lived happily ever after.

Copyright 2017 by Valerie L. Egar. May not be copied or reproduced without permission from the author.