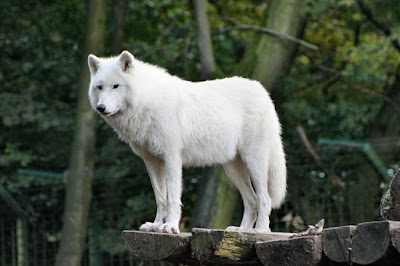 A dazzle of fairies lived deep in the forest in a thick fern glen near a babbling brook. The fern sheltered the wee folk and underneath the green fronds, tiny houses made from acorns lined moss covered avenues. Red mushrooms decorated neat yards and here and there, a hammock woven from spider’s silk was lashed between mushrooms.
Like any village, the avenues in the fern glen led to a bustling Main Street where all the businesses were located— a cobbler shop with tiny shoes made from pinecone petals.  A grocery with bottled moonlight and sun glitter. An apothecary with a wise herbalist who knew exactly how much honeysuckle nectar to mix with star shine for sweet dreams. A dress shop with clothes made from rose petals and daisies.
One day, the fairies heard thunderous splashing, worse than a heavy rain storm and closer, too.  Leaving the water, something pounded the ground so hard the earth shook. Looking up, the fairies saw grey fur above them. It shook, spraying water everywhere.
The  fairies ran and took shelter in a hollow under a tree and watched. The thing  collapsed in the fern and fell asleep.
“It crushed our houses!” they exclaimed.
The bravest ventured from under the tree to look at the creature. Long snout. Pointy ears. Bushy tail. Long legs.
“It’s a horse!” said the mayor.
The wise herbalist shook her head.
“Tiger!” said the cobbler.
“No.”
“Puppy.”
“No. It’s a wolf,” she said.
Just then the wolf stirred and opened his eyes. Few humans are able to see fairies and the same is true for those in the animal kingdom. Some have the special gift, most do not. The herbalist waited and saw the wolf blink. He shook his head, but he knew what stood before him— a magical creature, a fairy.
“You’ve injured your paw,” the herbalist said. “I can fix it.”
The wolf nodded his assent.
“What about our houses?” the others demanded. “Tell him to get out of here!”
She held up her hand. “Wait.” She made a mixture of soothing herbs and pressed them into his wound.
The wolf was grateful. “Men were hunting me,” he said. “I ran.”
The wise fairy nodded. “You trampled most of our village.”
“I’m sorry! How can I make it up to you?”
“It’s no worse than when the brook floods in the spring, but I have an idea. Let me talk to the others.”
The wise herbalist talked with the townspeople and they came to an agreement. The mayor presented the plan.
“We would like you to stay with us,” the mayor said, “but not in the village. You wouldn’t fit.”  The fairy children giggled, impressed with the wolf’s enormous size.
“You can build a den nearby, maybe over there.” The mayor pointed to a rocky hill, which looked like a perfect place for a wolf’s den.
“We need your protection. Squirrels and chipmunks steal our acorns. Wild boars root in the fern and destroy it. We need you to chase them away.”
The wolf shook his head. “I would, but those who hunt me still follow.” He lifted his nose in the air.  “They are getting closer.”
“But I shall make you invisible,” the herbalist said. “They will never find you and you will be safe.”
“Say yes,” yelled the children who were growing to like the furry beast.
“You can be our school mascot,” shouted the principal.
The wolf looked around. “I accept,” he said. “Yes.”
The herbalist immediately gave him a bitter liquid and he lapped it up. In a few minutes only a grey shadow remained and then, that was gone too.


The wolf hunters never found him and for many years, he shooed the squirrels, chipmunks and boars away from the glen. They sensed him as an invisible force and the rumor grew that the glen was haunted. Humans and animals stayed away. The fern grew more lush and fairy village increased until it became the largest in the world. It still exists, but only those with courage and eyes to see will find it.
Like the story? Share it with your FACEBOOK friends, 'like' and comment.
Copyright 2018 by Valerie L. Egar. May not be published, distributed or copied without permission from the author.
Published September 16, 2018 Biddeford Journal Tribune (Biddeford, ME).
Posted by Snickertales at 5:05 AM