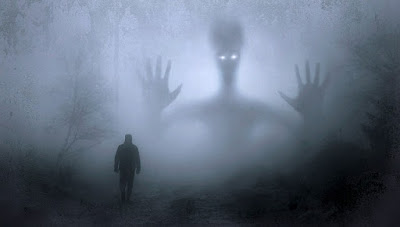 Once upon a time, an old wizard worked his magic to trap all the nightmares in the world.  Every scary dream beast was rounded up and locked in a sturdy box. The wizard jammed anxiety dreams— ones in which children and adults dreamed they had exams for courses they’d never taken or were about to go on stage to recite lines they’d never learned— into pottery jars and corked the tops so they couldn’t escape. Dreams about falling, being chased, losing something precious— the wizard tracked each one down, lassoed it and locked it up.
The wizard took the nightmares he’d captured and hid them in a dark cave. Locked boxes, corked jars— the wizard filled the cave with hundreds. He placed a large boulder in front of the cave’s opening and cemented it in place, so the nightmares would be contained for all eternity.
Thousands of years passed and people dreamed only happy dreams when they fell asleep, but one day, two explorers hiking through the mountains came upon the boulder.  In the passage of time, the cement holding the boulder to the cave’s opening had given way. With rain and snow, the erosion of earth, the boulder had moved enough to show the cave’s entrance.
“Someone was trying to hide the opening,” one explorer noticed, pointing to the remains of cement. Of course both immediately thought of hidden gold and jewels. They determined to go inside.
They pried the boulder aside and into the cave they went. Breaking the boxes and jars open, the explorers were frightened by a terrible howl. All the nightmares, free at last, flew out of the cave. Only then did the explorers see the inscription the wizard had written on the wall in every language known to man: Nightmare Cemetery. Do not disturb!
People all over the world tossed and turned when they went to sleep that night! Word spread that explorers had unleashed ancient nightmares that had been locked away.  No one knew what to do.
“Catch them again and lock them away!” people said, but no one knew the ancient spell the wizard used to corral the nasty dreams. Besides, no waking person could see them. They were wisps and changed shape quickly. Catching them was impossible. A nightmare might be the sound of footsteps running behind a person, coming closer, closer one minute and then turn into a spiral staircase with slippery steps climbing high into the sky the next.
“Let’s give them a part of the world to call their own— an unpeopled island, a remote mountain,” was another suggestion. A committee of wise women spoke to the nightmares in dream time and asked whether they might agree to live in a place away from people.  The nightmares laughed. “Without people, we wouldn’t exist at all. We aren’t going anywhere.”
Round and round the arguments went with people getting less and less sleep every night.  Businesses sold charms against nightmares, but still the nightmares came. People wrote advice— sleep with your window open and they escape your room. Sleep with your window closed tight so they don’t come in.  Never eat chili after eight o’clock. Eat chocolate before you sleep. (Everyone loved that idea, whether it kept nightmares at bay or not.)
No matter what people did, the nightmares continued to trouble sleep.
“Maybe they’re just hungry,” a child said.
Eyebrows raised.  People frowned. “What?”
“They’re hungry. I feed them all the time and they don’t bother me at all.  I have good dreams.”
“What do you feed a nightmare?” people wondered and imagined awful things— worms and snakes, monsters.
“Laughter. When they’re happy, they go to sleep. And they like long walks and sunshine. Drawing pictures. Flowers.”
“Nightmares like nice things?” Everyone was surprised.
The little girl nodded. “They like simple things that are fun.  Baking cookies. Smiles. Hugs.”  She paused. “ And I almost forgot.  They really like truth.”
People started feeding the nightmares by talking long walks. Gardening. Laughing out loud. Dancing. Being truthful. The nightmares weren’t hungry at night anymore and they slept, allowing people to sleep well, too.

Posted by Snickertales at 5:15 AM