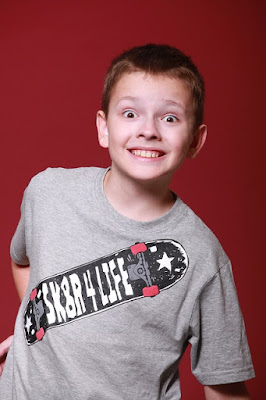 In the great Northern woods of Maine and Canada, everyone knows that with the right magic, an ordinary canoe can fly.  Nine year old Dennis was familiar with the stories, his Grandfather had told him about flying canoes often. Dennis looked at the silver canoe stored in the garage. If he could figure out how to make it fly in time for Halloween, he could zoom through the air with his friends and they could double, maybe even triple the amount of candy they got.
They’d start trick or treating in their own neighborhood, then hop in the canoe and fly to Portland. If they finished Portland early, they could try another town or two— Kennebunk, Biddeford, Saco.  Dennis wasn’t sure how far they’d go, but he knew by the end of the night, they’d have a lot of candy. All he had to do was figure out how to make the canoe fly. 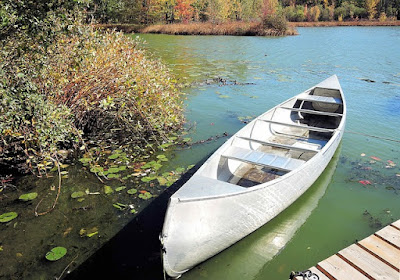 Early every morning, he climbed into the canoe and tried a few magic words— Abracadabra! Shazaam! Dosedoh! Nothing.  “I command you to fly!” Dennis  said a few times with a very firm voice. He thought he felt a little quiver, but that was just his imagination.  Words alone were not going to do the trick.
Perhaps, like Harry Potter, he needed a magic wand to make the canoe fly. He walked in the woods and found a nice straight oak branch. He waved it in the air and it felt just right. Later that day, he waved the wand over the canoe. “Up! Up!” he yelled. His dog Spark jumped, but nothing else happened.
Maybe it took more than one person to make a canoe fly. Dennis had wanted to surprise his friends Karl and C.J. with his Halloween idea, but since it wasn’t working, he decided to tell them about his plan and ask if they had any ideas.
“I think canoes only fly at night,” said C.J.  “You’ve tried during the day.”
“Good point.”
Karl frowned. “That is a good point, but some kind of energy has to make it fly,” he said.  “What lifts it into the sky? What keeps it there? That’s what we have to figure out.”
Dennis shook his head. “You’re thinking about it like it’s an airplane that has engines and runs on fuel. Magic lifts it up and magic keeps it in the sky. We’re looking for the magic.”
The next night, the boys dragged the canoe into the yard. They sat in it and concentrated on flying high over the treetops. Dennis waved his wand and C.J. said  magic words. Nothing.
“Maybe we need paddles?” said Karl.
“Good idea.”
They tried again, this time, paddling the air briskly. Nothing.
They were disappointed. “Halloween is magical,” Dennis said. “Let’s give it one more try on Halloween.”
After trick or treating in their neighborhood on Halloween night, the boys once again pulled the canoe from the garage and hopped inside with their bags of candy.  C.J. and Karl paddled the air while Dennis said the magic words. Whoosh! All of a sudden, they were off, high above the treetops. The canoe floated gently on a light breeze and the boys let it drift.
The lights below were beautiful. They were high enough to see ships in Portland harbor and flashing lights from lighthouses along the coast, red and blue neon in shopping centers, car lights along the turnpike. 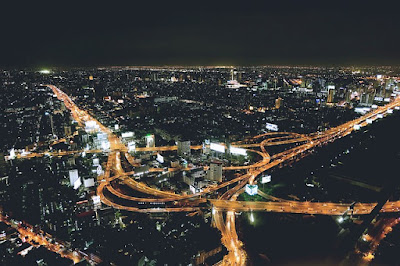 Above them, thousands of stars twinkled and a slice of moon looked like a smile. The boys stared, enchanted.
The canoe drifted quietly among wispy clouds, circled back to the house and quietly landed, just  as C.J. and Karl’s mothers arrived to pick them up.  Not once had the boys thought about interrupting their magical ride to do more trick or treating.
“Was that real?” Dennis whispered to C.J. and Karl before school started the next day. The boys nodded, and the three promised never to tell anyone.  Words couldn’t capture the wonder of the sky high canoe ride and no one would believe them anyway.
Like the story? Please share with your FACEBOOK friends and 'like' or comment.
Copyright 2017 by Valerie L. Egar. May not be copied or reproduced without permission from the author.
Published October 22, 2017, Journal Tribune Sunday (Biddeford, ME).
Posted by Snickertales at 7:06 AM