The Mermaid Who Couldn't Sing 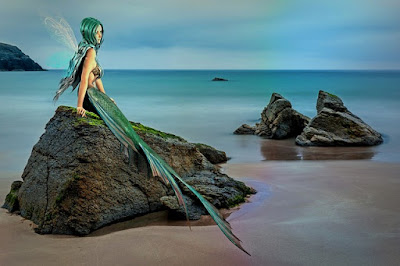 The Mermaid Who Couldn’t Sing

Lucca was a young mermaid who lived in the depths of the ocean with her family. She was beautiful with long, pale green hair, eyes that flashed gold in sunlight and a sleek mermaid’s body with shiny greenish-blue scales.
Lucca spent her days lounging on deserted beaches and evenings swimming in the waves.  She was happiest when the moon shone full upon the water and turned her world silver. She leapt from the water and played tag with her pet dolphin, Knoor.  She swam with schools of fish that glittered like stars.
But, Lucca had a big problem. Unlike other mermaids, Lucca couldn’t sing. Her voice was raspy and harsh. She couldn’t stay on key. When she tried singing high notes—a mermaid’s notable talent—not even a squeak came out.
“Mermaids are renowned for their musical ability, enchanting anyone who is lucky enough to hear their song,” lectured Mistress Salgum, the singing instructor at the Mermaid Academy. “Composed of water and starlight, mermaids’ songs go straight to the heart. We make the most beautiful music in the world.”
When Lucca sang with the mermaid choir, Mistress Salgum always singled her out. “No, no, no! Sing sweetly and on key, like this.” She sang a perfect scale. “Now you do it.”
Lucca cringed. “Do-ray-me-faaaa—“ Her voice wobbled from flat to sharp. No matter how often she tried, her voice did not improve. She sounded like a frog, croaky and harsh.
Lucca felt sad she could not sing. Though her friends were kind and no one made fun of her, she felt she was a disappointment. She visited the doctor. “Is there anything that can help my voice?” The doctor prescribed squid ink mouthwash with seaweed extract. “Gargle three times a day,” he advised.
Lucca did as she was told, even though it tasted awful. Her voice did not improve.
Perhaps she should practice more? Alone on a deserted beach, she sang her scales.  Knoor listened from the water. “How did I sound?” she called. Knoor sadly shook his head. Practice was not helping.
She sat on a rock and started to cry.  Suddenly, the rock moved. “Oh!” A cranky sea turtle poked his head from its shell.
“Use me as a chair, why don’t you?” he grumbled.
“So sorry,” said Lucca, and rolled onto the sand.  She continued to cry.
“Why all the tears?”
Lucca explained the trouble she had singing.
“Let me hear.”
Lucca managed half of  “Mermaid’s  Anthem” when the turtle raised one of his flippers. “Stop. Indeed, you are no singer.” He shook his head as though his ears hurt.
Lucca cried even harder. “I’m never going back home! I can’t!”
The turtle stared. “If there’s anything I know, every mermaid has musical ability. Go to the bottom of the ocean and bring back some glass bottles.”
Lucca stopped crying and dove into the water. After a short time, she came back with a few bottles.
The turtle told her to put different amounts of water in the bottles.  “Now hit them gently with a clam shell and tell me what you hear.”
The bottles made different sounds depending on the size of the bottle, the amount of water in it and where Lucca struck it. The sounds were lovely and Lucca found herself making up her own songs.
Every day after that, Lucca found more bottles and practiced. Soon she had composed a symphony. She played it for the old turtle. "I hear the ocean's roar and the songs of the whales in your music. That is beautiful."
She  played it for Mistress Salgum. “Just like I said! Every mermaid has musical talent.” She asked Lucca to play her symphony before the choir sang, which is exactly what Lucca did. Everyone clapped so much and for so long, high waves crashed on the beach until dawn.

Posted by Snickertales at 5:13 AM