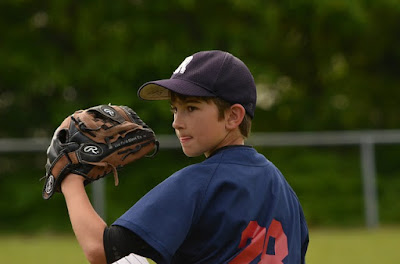 “OK, your turn at bat!” Jaden yelled.
Jaden and Tyler took turns pitching and hitting in a one-on-one baseball game. Tyler pitched ten times, giving Jaden ten chances to hit the ball. Then, it was Tyler’s turn and Jaden pitched. They didn’t run bases or keep score, but both of them knew when a hit looked like a home run.
Tyler raised the bat. Jaden pitched a good one. Whack! The bat struck the ball and flew high into the air, far from Jaden’s reach. The boys watched it arc and fall behind the run-down picket fence in the overgrown McAllister yard.
No one lived in the old McAllister house. With its crooked shutters and rickety porch, the house looked like it could star in a scary movie, and all the neighborhood kids avoided it. 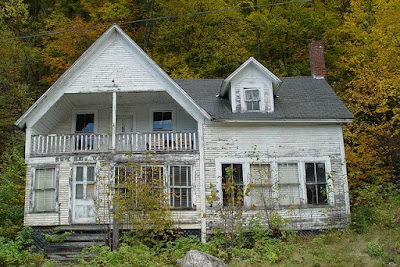 “What are we going to do now?”
Jaden shook his head. “We need to get the ball.”
“What about the story your brother told you?” Jaden’s older brother said the house had a ghost that watched from the attic window.
Jaden shrugged. “I never know when he’s teasing. C’mon, let’s look for the ball.”
It wasn’t going to be easy. The yard, long abandoned, was overgrown with wild raspberry bushes and thick clumps of high weeds.  It was hard to see where the ball might have landed. Walking among the raspberry bushes to look would be impossible, with thorns tearing at the boys’ skin and clothes.
“Do you think it came this way?”
“I don’t know,” said Tyler. Both of them looked at the field where they’d been playing and then the yard, trying to gauge where the ball might have landed. “How about by the porch?”
Jaden nodded. He’d rather not go closer to the house, but the weeds were fewer there and he thought the ball flew that way. They walked towards the porch, and bent to look under a few scraggly bushes that grew by the railing. Nothing.
“Careful!”  Broken bottles and other debris were scattered about. Finding the ball seemed hopeless.  The boys sat on the rickety steps leading to the front door. “What do we do now?”
Jaden shook his head. He didn’t know. He felt sad, but didn’t want to let it show.  How would he play ball with Tyler if the ball were lost?
“Siss, siss, siss!” All of a sudden, they heard faint hissing.
Tyler jumped, and so did Jaden. “What’s that?” The noise stopped.  Curious, the boys peered under the porch. It was dark and hard to see. Neither of them wanted to put his hand under.  What if it was a snake? They heard the hissing noise again. Jaden thought he saw movement.
“I’ll run home and get a flashlight!” said Tyler.
When he came back, he shone the light under the porch. Nestled in a pile of old rags, the boys saw five kittens, eyes still closed.
“Where’s the mother cat?” asked Jaden.
Just then, they saw a white cat scurry under the porch.
“That looks like Mrs. Perkins’ cat, Lily!” said Tyler. Mrs. Perkins had been looking for Lily for a week and had posted signs all over the neighborhood.
“You found her!” Mrs. Perkins exclaimed when she opened the door. Tyler handed Lily to Mrs. Perkins.
Jaden stood behind him, his sweatshirt in a little bundle. “We found these, too.” Wrapped into a warm nest, Mrs. Perkins saw five kittens, eyes still closed.
“Oh my,” said Mrs. Perkins. “I had no idea.”
“Look,” said Jaden. He held his hand close to the kittens. “Siss, siss,” they hissed.
“That’s how they protect themselves,” she said. “If you were a predator, you might be scared away.” She reached for an envelope.  “You did a wonderful thing finding Lily and rescuing her kittens,” said Mrs. Perkins. “Here’s the reward.”
“Oh!” said the boys in unison. They’d forgotten about the reward, twenty-five dollars! More than enough to buy a new baseball, and ice cream at Dairy Delight. 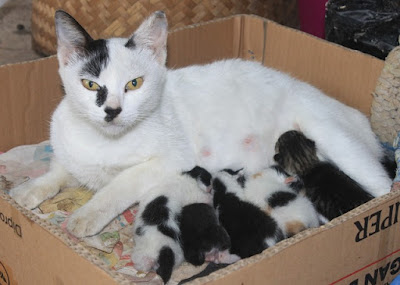 Posted by Snickertales at 1:28 PM