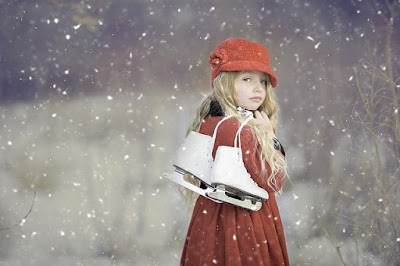 Skating in Moonlight
By Valerie L. Egar
Ingrid stood on the cold floor and peeked from her bedroom window at the moon shining on the frozen pond at the far edge of the Maine farm. Newly fallen snow glittered in the moonlight. Stars sparkled through bare tree branches.
Ingrid shivered. Her loft bedroom was always colder than the rest of the house except in the summer, when it was the hottest. The woodstove fire that warmed the house had died. Momma and Papa were sleeping, her baby sister Gretchen in her crib beside them.
Moonlight shining through her window into her eyes wakened her. She loved looking at the silvery light, but her feet were cold, even though she was wearing wool socks. She turned to jump back into bed, but glimpsed something moving on the pond. Deer?
She squinted to see better.  Not deer.
A lone figure glided across the ice, twirled, leapt high and landed. Someone was skating!
Ingrid pulled the wool blanket from her bed and wrapped it around herself.  From her distance, she couldn’t see who the skater might be. She couldn’t even tell
whether it was a man or woman. Ingrid watched until she fell asleep.
At breakfast, Ingrid announced, “Papa, I saw someone skating on the pond last night.”
Her father frowned. “That doesn’t seem likely. No one lives near. Too late for skating.”
Mama served Ingrid scrambled eggs and a big slice of homemade bread. “Are you sure you weren’t dreaming?”
“I was awake!” insisted Ingrid.
At supper Papa announced he’d walked to the pond to see if anything was amiss. “No foot steps in the snow except the ones I made walking there. The snow on top of the ice isn’t disturbed. No one was skating last night.”
“But I saw them!”
“Sometimes dreams seem real.”
Late that night, Ingrid woke herself up. She looked out the window. The moon shone bright upon the pond and the glittering snow. Back and forth, a  person skated, twirling and leaping. 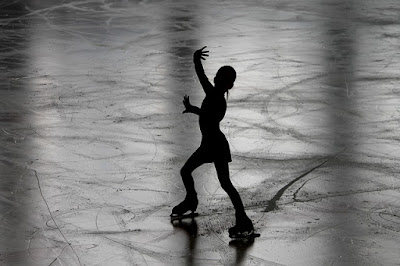 Ingrid ran to her parent’s room and shook her father. “The skater’s back!”
Groggy from sleep, her father and mother rose and looked. Nothing.
“She was there! I saw her!”
Her father shook his head. “So now it’s a ‘she’? No one could tell from this distance.”
Ingrid was embarrassed. She couldn’t really tell, but something inside told her it was a woman.
“Go back to bed, Ingrid,” Papa said. “It’s a dream.”
The next night, Ingrid hid her hat, boots and coat under her bed, determined to prove she wasn’t dreaming.  When she awoke and saw the skater, she put on her clothes and snuck out the door, running to the pond.
She watched the skater from behind a tree. Tall and thin, the woman glowed in moonlight. Ingrid was surprised she wasn’t dressed for the cold. Instead of a heavy winter coat and mittens, her hands were ungloved. She was clothed in white, in a dress one might wear to a summer picnic.
Fascinated, Ingrid stepped out from behind the tree. The woman stopped and stared, the way a startled deer might. Wordlessly, she pointed to a pair of skates at the edge of the pond and motioned for Ingrid to join her.
Ingrid laced up the skates, which fit perfectly. Though she wobbled the first few steps, she found her skating legs quickly. The woman took her by the hand and together, they glided across the ice. When the woman leaped, Ingrid leaped. When the woman twirled, so did Ingrid. Faster and faster they went, until the stars overhead spun. Ingrid felt more alive than she ever had.
Clouds covered the moon and snow began falling. Without a word, the woman disappeared.  Ingrid found herself at the edge of the pond back in her boots, the skates she’d worn disappearing  with the woman.
“Where are you?” Ingrid called. “Come back! Tell me your name.”
The next night, Ingrid looked for the woman, but she wasn’t there and Ingrid never saw her again. For the rest of her long life, she remembered flying over the ice in moonlight with a mysterious woman whose name she never knew.