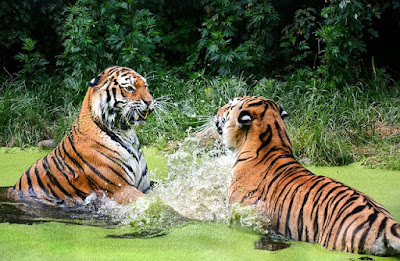 Half Empty, Half Full
By Valerie L. Egar

Once upon a time, a very long time ago, a husband and wife lived in a modest cottage at the edge of a small village. They had a donkey to pull a cart, a cow for milk and chickens for eggs. When they needed water, the husband hitched the donkey to the cart to draw water from the spring that supplied the village— one large jug for cooking and washing, a huge barrel for the animals to drink and to irrigate the garden.
One afternoon, as the husband finished his lunch, his wife said, “My dear, the water barrel is half empty. I’m afraid you will need to go to the village well and get more.”
The man trudged to the water barrel and looked in. “The barrel is half full,” he said. “I don’t know what you saw.”
With that, his wife became angry. She marched to the water barrel and thrust her arm into the empty space at the top. “There is no water here! Half empty!”
Her husband, who had much longer arms than his wife, reached into the barrel and splashed water. “Half full!”
The argument continued into the night and the following day. “I am right and I can prove it,” the woman shouted. She walked to the village and asked the first twenty people she saw to follow her. She pointed to the barrel. “How much water is in the barrel?”
Some of the people said the barrel was half empty. Others argued it was half full.  Soon the whole town was involved in the fight. People thought the mayor and town council should settle the matter by writing a law declaring whether water barrels should be deemed “half full” or “half empty” when water was at the half-way mark. The mayor and town council couldn’t agree though and they ended up in a shouting match.
Philosophers and mathematicians began to quibble about the meaning of “full” and “empty.” The great philosopher, Teosophigustus, asked whether any water barrel could ever be considered ‘empty’ when the space inside the barrel not occupied by water was occupied by air.  Fellow philosopher Diodibbit, replied, “Well, if that is the case, sir, then everything is always full. But if that is true, there are no halves of anything! And if that is the case, how shall we ever cut a pie?”
People who had been friends for years stopped talking to each other. No one seemed to notice that the village began to look neglected. Life wasn’t as sweet as it had been before they’d started arguing.
On Sunday afternoon, a stranger riding a horse stopped at the small cottage seeking directions. “Ah,” said the husband. “Let me ask you a question.” He took the
stranger to the barrel. Water had not been added , nor had any been taken away. The husband asked, “Half full or half empty?”
The stranger laughed.  “What a silly question!”
“Why silly?” said the wife. “It’s plain to see it’s half empty.”
“And I say half full,” declared the husband.
The stranger continued to laugh. “Your garden is withered and you will have no harvest, but you had enough water to irrigate your garden. Your animals have fled to seek water, but you had sufficient to quench their thirst. You had enough—“ He pointed to the wife. “But you concentrated on what you didn’t have.”
“Ha!” said the husband. “I was right!”
“I didn’t say that,” said the stranger. “Once the garden was watered and the animals taken care of, you would have needed more water, because the barrel would have been empty. She was prudent, looking ahead.”
The husband and wife were confused. “So who was right?”
The stranger shook his head. “Neither was right or wrong. You saw it differently. But arguing about it cost you your harvest and your livestock, not to mention the argument turned your town upside down. In the end, what you called it made no difference. That water was necessary was the only thing that mattered.”


The traveller shook the dust off his feet and pointed his horse in a more peaceful direction.
Like the story? Share it with your FACEBOOK friends, like and comment.
Copyright 2018 by Valerie L. Egar. May not be copied, reproduced or distributed without permission from the author.
Published October 7, 2018 Biddeford Journal Tribune (Biddeford, ME).
Posted by Snickertales at 6:14 AM