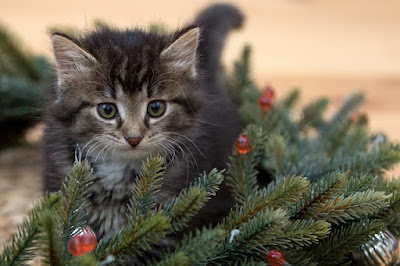 Mr. and Mrs. Jenkins lived at the North Pole, a mile from Santa’s workshop. They raised reindeer, grew Christmas trees, and were good neighbors to Santa and Mrs. Claus. Every year, Mr. and Mrs. Jenkins invited them for Christmas dinner, knowing they were exhausted from months of preparing for Santa’s toy deliveries on Christmas Eve.
When Santa asked Mrs. Jenkins what she wanted for Christmas, a kitten was at the top of her wish list. A very tired Santa returned from his trip around the world and stopped at the Jenkins’ house. He carried a basket tied with a big red bow to the door.
Mrs. Jenkins peeked in the basket. Three furry faces looked up. “Oh, they’re so sweet!” she cried.
“I stopped at the shelter and I didn’t want to leave any behind, so I took all three,” said Santa.
“Thank you!” Mrs. Jenkins said. She named the tabby Tic, the black and white one Tac and the red kitten Toe. The three snuggled together in a sun patch and fell asleep, tired after their long ride in Santa’s sleigh.
“See you and Mrs. Claus later,” Mrs. Jenkins said.
Mrs. Jenkins bustled in the kitchen, making stuffing for the turkey, while Mr. Jenkins worked in the barn, feeding the reindeer. Mrs. Jenkins heard a noise and peeked in the living room. The kittens were playing race and chase! Toe was in the lead with Tic and Tac close behind. Up, over the back of the couch, round and round the Christmas tree, across the carpet.
Toe leaped to the mantle and skittered along the narrow shelf. Crash! Glass angels hit the floor and broke. Ceramic snowmen flew off the shelf and smashed.
The noise frightened Tic. His tail puffed out like a fat brush and he scrambled across the room and jumped on the windowsill, knocking the potted Christmas cactus to the floor. Kaboom! The pot smashed and moist dirt spilled all over the carpet.
Tac was frightened, too. She scrambled into the kitchen.
“Oh my!” said Mrs. Jenkins. She sighed. She knew the kittens were just being kittens. They didn’t know any better, yet. She swept up the glass and wrapped it carefully for the garbage, vacuumed the dirt on the carpet, and repotted the Christmas cactus. She looked around the living room. Much better, but where were the kittens?
“Kitty, kitties,” she called. Nothing.
She walked into the kitchen.  The fat turkey she was about to stuff before the kitten ruckus started, sat in its roasting pan in the middle of her large table. Three kittens stood next to the turkey, nibbling on it with their tiny kitten teeth. “Shoo!” she shouted. The kittens scattered. Mrs. Jenkins put her head in her hands. “Now what will I make for Christmas dinner?”
Just then, Mr. Jenkins came in. Mrs. Jenkins pointed to the turkey. “Looks like Santa brought you poltergeists not kittens,” he said.
They heard more noise from the living room and hustled in to find Tic hitting an ornament on the branch of the Christmas tree with his paw. Toe wrapped his paw around a cranberry garland and pulled. Tac eyed the tree and 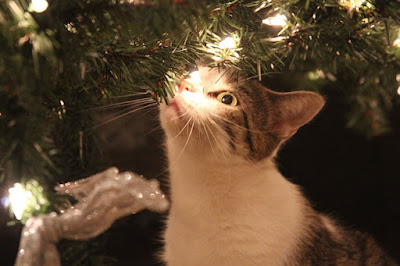 raced up the trunk. Tic and Toe followed. Higher and higher they climbed. The tree wobbled left, then right, then crashed to the floor.
Mr. Jenkins set the tree upright and Mrs. Jenkins put the ornaments that hadn’t broken back on. Once again, she vacuumed the carpet. The tree listed a little to the left, but would have to do.
Finally, the kittens were exhausted and fell asleep.
Mrs. Jenkins popped frozen lasagna into the oven, made a salad, and put the chocolate layer cake she’d baked in the pantry and shut the door tight.
When Santa and Mrs. Claus arrived, Santa carried in a tall pole wrapped with rope. It had cubbyholes and platforms with dangling toys, everything kittens like. “A cat tree!” Mrs. Jenkins said. “Exactly what we need!”


“And just in time, too!” said Mr. Jenkins as the kittens woke up. “Santa, you saved our Christmas!”
Like the story? Please share with your FACEBOOK friends and 'like' or comment.
Copyright 2017 by Valerie L. Egar. May not be copied or reproduced without permission form the author.
Published December 10, 2017, Journal Tribune Sunday (Biddeford, ME).

Posted by Snickertales at 6:13 AM