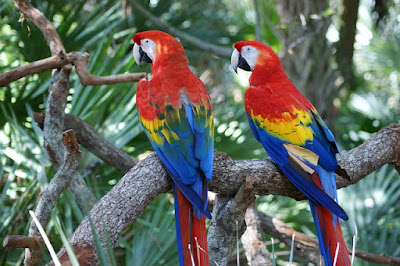 The Truthful Parrots
By Valerie L. Egar
Inspired by a South American myth
Long ago, parrots were admired not only for their colorful feathers of green and bright blue, scarlet and yellow, but also for always telling the truth. A parrot perched in the corner of a store or house was the best guardian a person could wish for, a tiny observer who truthfully reported what he saw or heard.
“Oh,” a mother might say to a child at supper, “how wonderful! You’ve eaten all your lima beans.” Then the parrot would remark, “No. Eduardo fed them to the puppy.”
Or, a shopkeeper would smile at a customer and assure him the coffee was fresh, only to hear the shop parrot shout, “Brewed five hours ago!”
People learned not to stretch the truth with parrots around! They also learned to not ask questions when they didn’t want to hear truthful answers.  The mayor asked villagers what they thought of his daughter’s singing.
“Like a nightingale,” they politely replied, even though they thought the girl sounded like a duck. All eyes turned towards the parrot. “Quack. Quack,” came from the perch in the corner.
Not everyone appreciated parrots’ unvarnished truth, but the scoundrel Tevra despised it.  When he stole squash from his neighbor’s garden, his misdeed quickly came to light. Despite his denials, his parrot quickly set the record straight.  “Tevra stole three squash yesterday from the garden,” the parrot said. “He ate them last night.”
“Parrots lie! We’ve been duped for years,” Tevra cried, but of course, no one believed him. “I can prove it,” the devious Tevra announced. “Come back tomorrow morning and you will see.”
That night, before the moon rose, Tevra draped the parrot’s cage with black cloth. He took water from his cistern and climbing a ladder, sprinkled it on his tin roof, making it sound like rain. When he pounded the roof, it sounded like thunder.
The next morning the villagers arrived early to hear Tevra’s proof.
“Did the moon rise last night?” Tevra asked the parrot.
“No,” the parrot replied. “It was very dark.”
“And the weather was clear,” said Tevra.
“Not at all! It rained for a long time.”
“A gentle spring rain?”
“No! There was thunder.”
The villagers looked at each other in astonishment. “The moon was full. It was like daylight outside.”
“Not a drop of rain fell.”
“I told you parrots cannot be trusted,” smiled Tevra. “Think of all the other lies they have they been telling us.”
The shopkeeper nodded his head. “Tevra is right. My coffee is always fresh and the parrot said it wasn’t.”
“My sweet daughter sings like an angel,” shouted the mayor. “ Everyone knows that.”
All the villagers were willing to believe parrots lied, much happier with lies than the parrots’ truth. Only Eduardo’s mother doubted that her son had really eaten his lima beans, knowing that feeding them to the puppy was much more likely.
The parrots were dismayed by how easily their service to mankind was dismissed. Flying into the jungle to consult with each other, they met a wise mynah bird. For centuries, mynah birds could speak, but only repeated what people said.
“People like hearing themselves talk,” the old bird said. “Repeat what they say, and they will always be happy.”


And, from that day on, parrots only echoed what they heard and everyone was satisfied.
Like the story? Share it with your FACEBOOK friends, 'like' and comment.
Copyright 2019 by Valerie L. Egar. May not be copied, reproduced or distributed without permission from the author.
Published February 2, 2019 Biddeford Journal Tribune (Biddeford, ME)
Posted by Snickertales at 7:47 AM